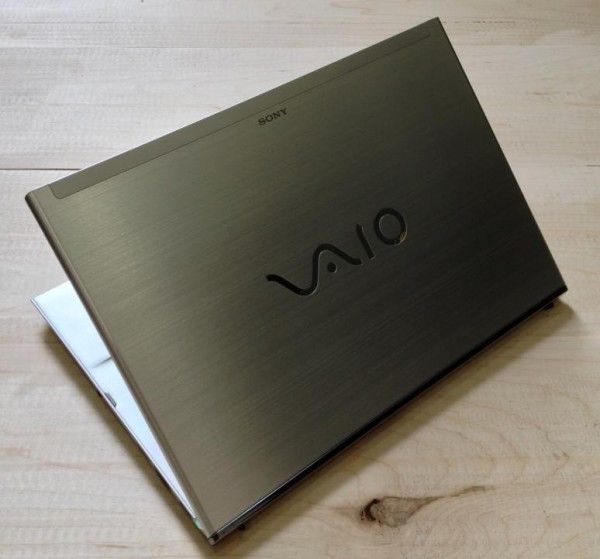 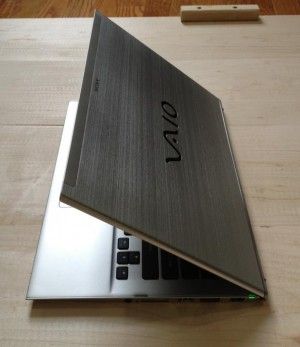 For me the design of the T13 is the standout part of the product. The sharp angles and unique style and prevent the T13 from feeling like a ‘me-too’ design that aims for the MacBook Air or MacBook Pro as some other Ultrabooks have done. There’s a good reason why the T13’s design feels above its class; it shares design cues with Sony’s ultra-mobile ultra-premium laptop, the Vaio Z. The Z series starts at $1599 and can be configured all the way up to $2999! The T13 gets that trickle-down design effect without the premium-price. In fact, Sony has just lowered the starting price on the T13 to $669 which makes it one of the more attractive Ultrabooks on the market!

The top of the T13 is aluminium with the bottom and keyboard deck being a similarly colored smooth plastic. I’ve found the keyboard deck to be very comfortable; perhaps it’s something about the distance from the edge to the keyboard? Or maybe it’s the subtle rounding of the edge where your palms rest? Whatever the case, I’ve found it a joy to type on for the most part.

Some people may not enjoy the keys which feel squishy at first, but with a slight modification to your typing style they actually work quite well. I think I’d still prefer the Lenovo U310 or Gigabyte U2442 keyboard though. The keyboard area itself is very solid with absolutely no flex during normal typing and very little even when pressed hard. Typing is very quiet.

The trackpad is great. It smartly shares the same dimensions as the screen which makes it easy to reach the whole screen without much finger lifting. The placement of the pad is great and I never accidentally moved the mouse with my palms while typing.

Unfortunately, like a number of other Ultrabooks, the T13 has an annoying feature where it locks the mouse from moving for a short amount of time after pressing a key. While this works well to prevent accidental movements of the mouse with your palms it can be really annoying if you want to do any casual gaming where you need to use the trackpad and keyboard. So far I’ve not found a way to disable this function, even through the trackpad settings. Fortunately it doesn’t happen when using an external mouse. 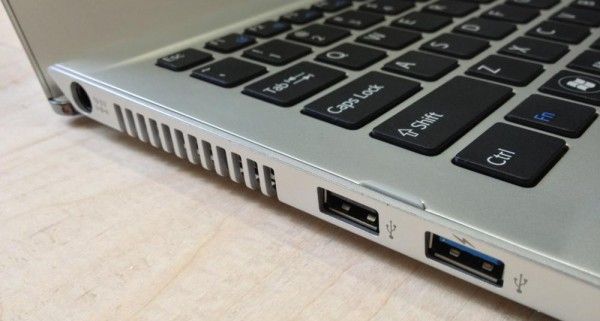 The port set on the T13 is almost optimal but it has one fewer USB ports than it ought to:

The addition of one more USB port would do great service to those who use their Ultrabooks at the desk regularly. Aside from this, two full output ports will make connecting the T13 to two additional monitors quite easy.

We’re using the top end model of the T13 which includes the following:

The T13 scores pretty well in the Windows Experience Index test, below is the score from the T13 and the Asus UX31E (Core i5, HD3000, 4GB of RAM) for comparison:

Asus Zenbook UX31E:
The CineBench benchmark does a slightly better job than WEI at showing the relative performance between the two: 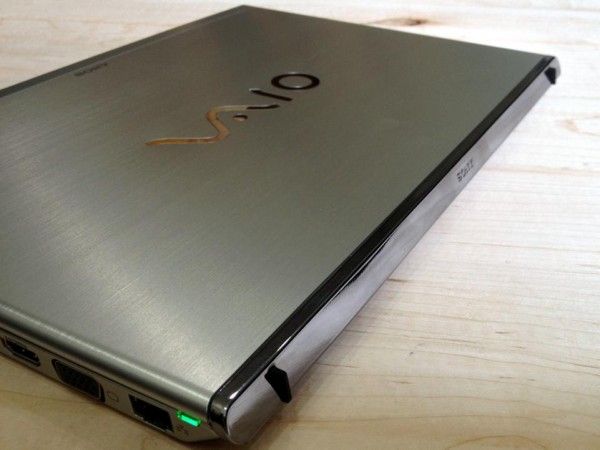 Overall I’m quite impressed with the T13. Aesthetically it ranks in my top 3 Ultrabooks and yet it is one of the cheapest in the market. That third USB port would have been very much welcomed on this 13″-class device.

Out of the box the T13 was loaded down with bloatware including a redundant top menu bar. There were 100+ running processes out of the box. Unfortunately users will either have to spend time uninstalling the bloat or just live (and suffer) with it. It is a shame that the out-of-box user experience does not match the great hardware design (maybe Windows 8 will fix this). Sony offers a ‘fresh start’ install which is bloatware free, but only if you shell out extra for Windows Pro which is quite upsetting. Think about this… they are literally installing so much software that it diminishes the user-experience to the point that they are offering for you to pay to have it fixed!

The 1366×768 resolution might bother some but it should work just fine for most, and don’t forget you can attach two additional displays via HDMI and VGA if you want serious screen real-estate.

I’d definitely recommend the T13 to a friend based on price and hardware quality, but only if they’d let me at it to clean up the software bloat first. If you are comfortable doing this on your own then you should definitely consider the T13 as an Ultrabook option.

If there’s anything in particular you’d like to know, drop us a line in the comments and we’ll give it a shot while we have the unit with us.