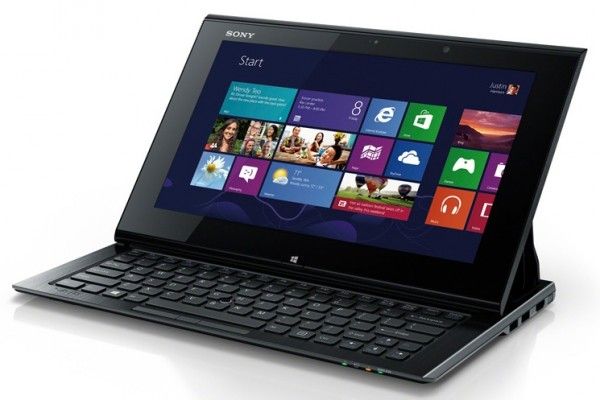 The Duo 11 is a very exciting slider hybrid which has an 11″ capacitive touchscreen also has an active digitizer which allows from extremely precise natural handwriting (‘digital ink’) input. 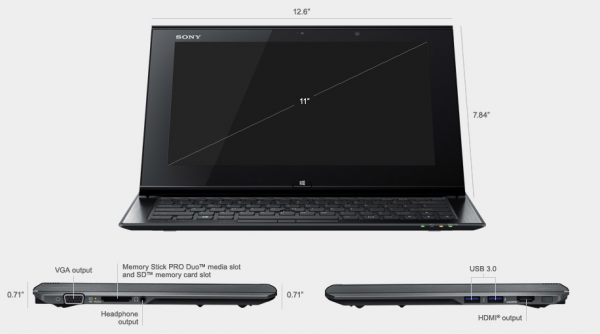 The port set is good for a device in the 11″ class:

The Duo 11 weighs 1.3kg and the is 18mm thick which is the limit for Ultrabooks with screens 13″ and below.

Update: Some models are indicated to have a ful sensor set including GPS and NFC.

Here is technical comparison of the three Intel Core Ivy Bridge processors available on the Duo 11.

All specs, links, images and videos are in our database: Sony Vaio Duo 11 page. 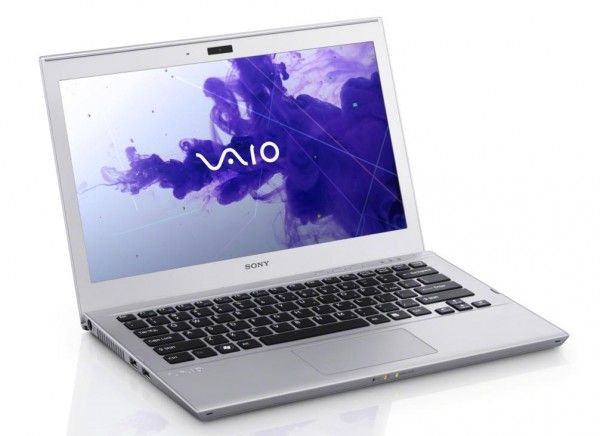 As we noted the other day, Sony is launching a touchscreen version of the Vaio T13. The touchscreen T13 is identical to the standard T13 aside from the touchscreen.

The cheapest T13 you can get with a touchscreen is the ‘SVT131290X Enhanced’ which starts at $899 and has some customization options.

You can actually customize the $899 model up beyond that if you’d like by adding up to a 512GB SSD. With all hardware options maxed out you’d be looking at a $2099 price tag.

Sony has dropped the price on their non-touchscreen version of the T13. We were impressed by the $769 starting price back when the T13 launched. Now Sony has managed to shave $100 off the price which brings the starting model to $669!

We’re pretty impressed with this; from our testing the T13 is a well designed product from the hardware perspective regardless of the price. If you are looking for a value-Ultrabook, don’t miss the T13!

For $70 you can upgrade to the Intel Core i5-3317U (1.7GHz, 2.6GHz Turbo) which we would recommend to get access to the Turbo Boost functionality for faster performance.

You can also add 2GB of extra RAM for an extra $30 but we’d recommend skipping that option and instead sticking with 4GB of RAM. You can easily add the extra 2GB of RAM (or more) for much cheaper because there is an open slot that you can access on the bottom of the T13 (just make sure you get DDR3-1600MHz RAM). This will get you started for 2GB RAM sticks.

We can’t imagine any reason that Sony would drop the T11, though they never launched it in the US market likely due to market trends (Asus also never launched their 11″ UX21A in the US). There was no announcement from Sony US regarding the T11 with Windows 8/touchscreen or otherwise. European Sony sites don’t seem to have started their Windows 8 marketing yet but we’ve got to imagine we’ll at least see a Windows 8 version of the T11 if not a touchscreen equipped variant as well. Whether or not it’ll be available in the US is less clear.