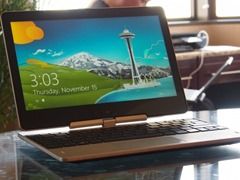 The HP Revolve is a convertible, rotating screen ultrabook-like (it may even be an Ultrabook convertible – we don’t know for sure yet) focused at the pro market with features and options like NFC, LTE, dock and Gorilla Glass and due to its B2B nature, you probably won’t find many on retailers shelves and you probably won’t find it down below the $1000 price point either.

It looks like HP have done a good job on the styling with the Revolve but side-on views reveal a fairly significant thickness compared to an Ultrabook. 25mm is my guess which means, on the plus side, it could have a reasonable battery inside. On the negative side, this could be fairly heavy, especially as a tablet.

GottaBeMobile have more pics and a demo video over at their site so hop on over and check it out. We’ll try and get all the specs together in the database for you.