The upgrade from non-touch to Windows 8 touch is one you’ll see on a lot of models over the next year. It’s a relatively easy upgrade for manufacturers to make that expands their ranges out into the new touch-enabled market. The Lenovo Thinkpad X1 Carbon is the latest to get the treatment. Order the Lenovo Thinkpad X1 Carbon Touch today and you could be swiping and pinching your way through the holidays later this month. 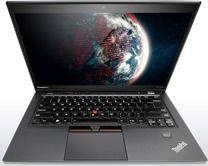 Available to order in the USA (and likely to appear in other countries soon although we can’t find it in Germany or UK yet) and ready for a 22 Dec ship date the X1 Carbon with a 1600×900 touchscreen is yours starting at $1499. The “14" HD+ (1600 x 900) (300 nit) wide viewing, 10-finger touch screen” is edge-to-edge but glossy and we don’t know if it has the same LCD panel as on the original X1 Carbon. Some have complained about visible lines between pixels on that model – the ‘screen door’ effect. We didn’t have an issue with it when we reviewed is a few weeks ago though.