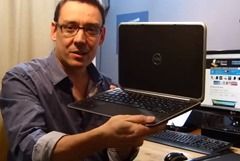 Thanks to Ultrabook-king.de for sending the Dell XPS 12 over.