We’ve seen the Dell Venue 8, the Toshiba Venue, heard about the Acer iconia A1 and had hands-on with the ASUS T100 but now it’s HP’s turn to launch a Windows 8.1 Tablet on Baytrail. The HP Omni 10 is a no-frills tablet, probably aimed at a professional market rather than a consumer one. 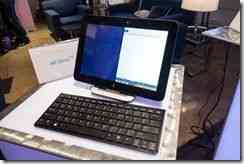 This should be a Connected Standby tablet meaning 300ms availability and always-on WiFi / Windows 8.1 apps.

Engadget mention Celeron or Pentium processor which would indicate Baytrail-M rather than Baytrail-T. The major difference being that the SSD could be a lot faster. We’ll try and get confirmation for you but for now we’re treating this as a Baytrail-T tablet.