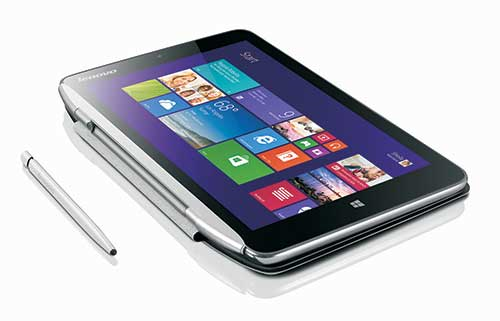 Starting at $299, the Miix2 will be one of the thinnest and lightest 8-inch Windows 8 tablets coming in at 8.35mm and 350g and will come with a Bay Trail processor, a 1280×800 10-point multi touch display that supports pen input and has a 178-degree viewing angle. Following the current trend Office Home & Student 2013 is also bundled. Wifi, Bluetooth 4.0, 3G and GPS are also onboard.

Update: Lenovo Miix2 specs and more, now in our database.

RAM clocks in at 2GB while storage is available from the base 32GB up to a 128GB eMMC with expandable memory also available from the included micro SD card slot, which curiously is stated to only go up to 32GB. Apart from the storage card slot no other ports are mentioned in the press release but we will hopefully have more information on that when the official page is posted. The device will also have 2 cameras, a 2MP shooter on the from for Skype calls and a 5MP camera on the back. Battery life is quoted at 7 hours.

An optional cover which doubles as a stand is available in several colors  as well as an optional stylus to take advantage of the pen input, though no mention was made of what digitizer technology is being used. From the looks of the pen included with the press shots though this could be limited to capacitive styli only but that remains to be confirmed.

The Miix2 should be available at the end of this month starting at $299 for the 32GB version.