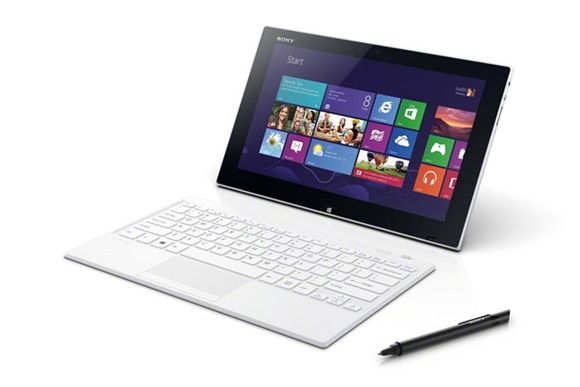 The Sony Vaio Tap 11 is, in my opinion, one of the technology engineering feats of 2013. An 11.6-inch tablet weighing 780 grams / 1.72 pounds is impressive enough but when it runs a Core i5…you’ve got something very special and in fact, something I believe will be more popular than the Microsoft Surface Pro for a number of reasons. As for the price, it’s competitive.

I checked out the Sony Tap 11 at IFA early in September and I was really impressed (video below.)  The Triluminous Full-HD screen is incredible for a start, the 9,9mm thickness is something you never hear about when talking about Core CPUs,  a digitizer is the perfect icing on the screen and even the keyboard appears to be productive for its size. There’s even an 8MP Exmore camera, probably the same as on the Sony Vaio Duo 13 that I recently tested.

Sony Vaio Tap 11 in our database – View the specs, videos, news and more.

But what about the price? It’s good news and bad news.

The good news is that I’m seeing entry prices at 799 Euros with 128GB SSD and 4GB RAM. The bad news is that starting price is for a Pentium-branded Haswell CPU at 1.2Ghz with no Turbo Boost.  It’s probably the Intel Pentium 3560Y with ‘HD’ graphics (not HD 4000), no Quick Sync Video, no WiDi and no Hyperthreading. Not nice. For a ‘real’ Core CPU you’ll have to look at the next model up.

A Core i3 version, is listing at some retailers for 946 Euro. You’ll get HD4200 with Quick Sync Video, WiDi and Hyperthreading but not Turbo Boost. Note that it’s with LTE so if we take the usual 80-euro premium away for that, we’re at 866 Euro, the same street  price as a Microsoft Surface 2 Pro with 64GB storage and the full Core i5-4200U / HD 4400 processor.

A Core i5 version, with LTE, is showing for 1199 Euro, which seems an excessive premium over the Core i3 version. All versions come with the keyboard, stylus, GPS and NFC function according to retailers.

Note: Those Euro prices include local taxes of 19% so US readers will see dollar pre-tax prices at much the same level. Expect $799 starting price.

All articles about the Sony Vaio Tap 11 here.

Note: I took a close look at the Surface Pro 2 over at UMPCPortal.

The key thing here is that the Vaio Tap 11 is lighter which helps in a lot of consumer tablet scenarios. I’ve had the 760 gram 11.6-inch Samsung ATIV 500T for a while so I know it’s a comfortable tablet in sofa-mode. In addition the 11.6-inch screen will aid productivity. It’s my opinion that 11.6-inch is the smallest screen size that you can get multi-windows productive on in ways that students and office workers do. Yes, the Surface Pro 2 has a faster, more powerful processor but if we compare the Core i5 variants we’re in the same ball-park until you really push the limits. Most of us won’t.

More images, both official and by UMPCPortal, in the gallery.

Note: It’s difficult to decide where to write about the Sony Tap 11. On one hand it’s built on Ultrabook specifications, on the other, it’s ultra mobile. For this post, I’ve chosen Ultrabooknews. I track and report on all ultra mobile PCs at UMPCPortal.