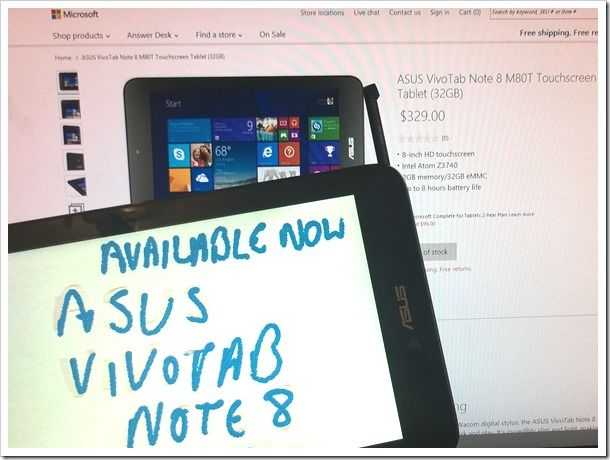 I have one, along with the Dell Venue Pro 8 and Toshiba WT8, here and I can tell you that not only is the pen working well but it has even more value because it’s stowed on the device. Annotate in Reader, Draw in the Windows Metro OneNote app, have fun with Fresh Paint, and that’s just in the Modern UI. The palm rejection is super due to the registration distance of the pen (it’s registered before your hand gets anywhere near the screen)

The pen isn’t for everybody but it really really extends the usage of the tablet into note-taking, annotations, creativity and desktop control.

A 32GB version is going to cost you $329 which is more than other Windows 8.1 tablets but you’ve got the pen, a pretty good rear camera and fun camera software (YouCam included) and ASUS have done a really intelligent thing with the recovery partition. They’ve taken it off the SSD and put it on an included MicroSD card saving 4GB of space on the drive. Once you’ve put that somewhere safe and dropped a 32GB card in and configured Windows to store personal data on the microSD, you’re good to go.

The screen isn’t as good as that on the Dell Venue 8 Pro and I have to admit that the Dell is far nicer to hold for long periods due to rubberised back, smoother edges and smaller size but the ASUS isn’t terrible.