With only 2/9 touch PCs updated here, 1 installing as I write, 1 downloading and 5 failures that need re-trying I suspect that there’s quite a bit of throttling and control going on by Microsoft today. I’m behind 1 IP address and after trying concurrent installs I’ve dropped back to a one-at-a-time method and it seems to be working now. I advise you do the same if you have multiple PCs

The Dell Venue 11 Pro, Lenovo Miix 2 10 and Acer W510 have updated successfully and all three are booting to Modern, as expected. Non-touch PCs will now boot to desktop.

I’m not a fan of integrating the mouse controls on the Modern UI but because they are hidden when using touch, it’s not an issue. The start-screen search box is a good idea. A Control Panel shortcut now appears in the Modern ‘Change PC Settings’ menu and you can pin Modern apps to the desktop taskbar – a first step in cross-environment integration but remember there’s no floating Windows Store apps in the desktop yet and no changes to the Start Menu. They are coming in a future update. Newly installed apps are easier to find in the Modern apps list now.

For those of us lucky enough to have Connected Standby-capable devices, you won’t see the Power icon on the Start screen.

Just in case you think it’s not worth updating because you’re on a tablet, think again. If you don’t update you’ll eventually lose the ability to update in the future. This update is obligatory.

A new ‘Disk Space’ menu item is a good start in providing users with 16, 32 and 64GB SSDs easier ways to control disk usage but there’s a lot more that could go in there. A shortcut to the ‘Disk Cleanup’ option for a start. 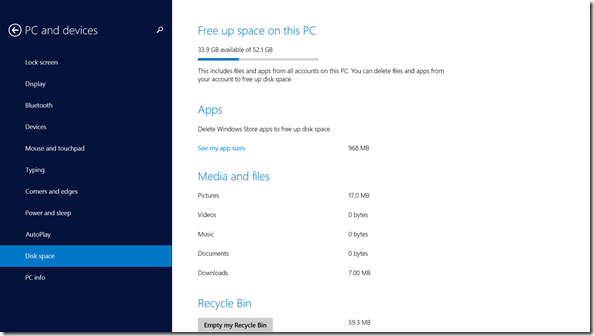 Here’s a video update from my home office this morning. Let us know what your experience was in the comments below and if you’ve had problems, let us know which device it was.