Chromebooks have been grey, boring and cheap over the last year. Granted, the target market may not be looking for excessive style or processing power but as Chrome OS improves to include local media playback and attracts more entertainment software the potential to sell Chromebooks to consumers increases and that’s why I like the Lenovo N20p. It adds a little extra excitement to the package in the form of a 270-degree rotating touchscreen which provides a great stand mode for news reading, watching videos and other casual operations. The fanless processing platform may not be the fastest but it’s perfect for the Lenovo N20p Chromebook.

I’ve had three days with the Lenovo N20p and I’m surprised how good the basic touchscreen experience is on Chrome OS. I’ve spent years with touchscreen Ultrabooks and have learnt how to get the best out of touch on a laptop and Chrome OS isn’t getting in my way. I’m missing touch-capable applications though and that’s a big problem for touch right now. Touch is simply not high enough on the list of considerations for HTML5 software designers. It will improve, but it will never be as good as on a touch-only OS.

The Lenovo N20p Chromebook isn’t a high-quality notebook; Let’s get that straight. It’s built to a target price and uses thin materials and a highly integrated (read non-upgradeable) motherboard. (See below.) The keyboard isn’t what you expect from Lenovo either although it does feel similar to the keyboard on the Lenovo Flex 10. Out of the box there was some upwards bowing of the keyboard which was extremely disappointing. I shouldn’t have to but I popped-off the keyboard (an easy fingernail-only process) and put some extra double-sided tape in. It’s much better now but it’s an indication of how the design, components and assembly costs have been kept to a minimum. 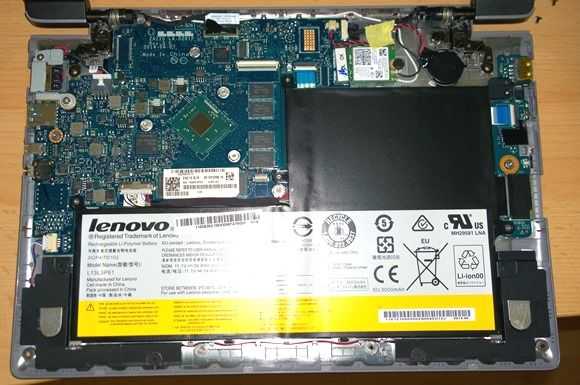 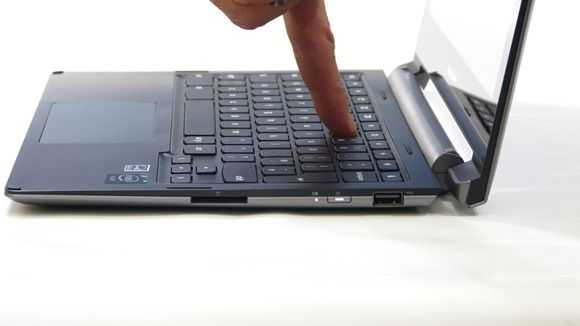 Low-quality applies to the screen too. It’s a non-IPS 1366×768 screen with what looks like poor black levels and, to my eye, poor colour coverage. It’s a real shame because the Windows-based Acer Aspire Switch 10 at a similar price offers a much better screen that really improves the video-watching experience…and that’s something I’m interested in. 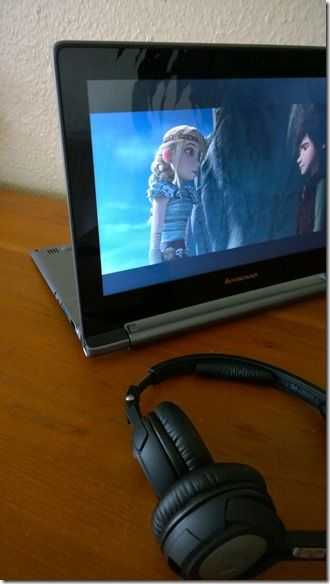 With offline video playback connected to some Bluetooth headphones you’ll get 7 hours out of a full charge. That’s enough for my cross-Atlantic trip to Intel’s Developer Forum in a weeks time. I suspect I’ll be fine with the screen once I’m into the film and with limited viewing angles at least my neighbours won’t be gawping at my videos, or even my documents, as I fly. In my hotel room I won’t be distracted by fan noise either.

There’s a third bit of disappointing news to report. Just hours after unboxing the Lenovo N20p Chromebook I must have brushed it against something and the casing has scratched. It appears that money has been saved on the paint-job too. 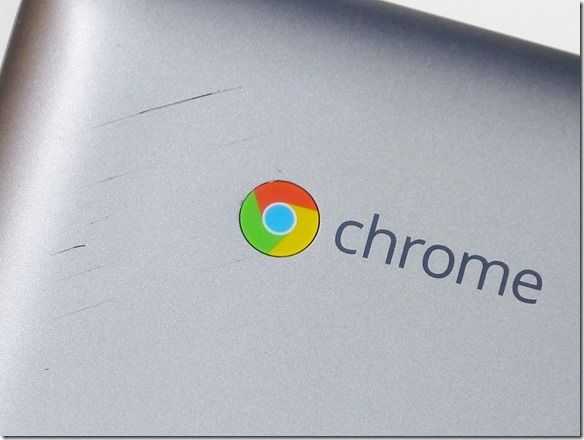 Speakers are good at medium levels (but distort at high levels) and the platform is capable of  scoring 1387 in Peacekeeper. That’s in line with other Celeron Baytrail-M devices. E.g. Lenovo Flex 10

There’s an additional power button on the side (but no external volume) a USB 3.0 port, USB 2.0, full-size SD card and a micro-HDMI port. I’ve got 4GB of RAM in this model with 16GB of storage. Inside you’ve got an AC-capable WiFi module which appears to provide very solid performance in my environment here. (2.4Ghz WiFi-N)

There’s space on the board for a SIM-card port too which would indicate that Lenovo have thought about 3G/4G options.

So far, so good. I like the Lenovo N20p Chromebook design and it fits exactly where I expected it too. It’s not a laptop for your office desktop and I’m not sure, given the limited processing platform and cheap materials, that I’d recommend it for educational use but if you want something for the coffee table, the car, the seat-back, the holiday or on the armchair this casual Chromebook is a good match and offers something a little more exciting than other Chromebook options.

If you want a better keyboard with a longer battery then the (non-touch) ASUS C200 is the Chromebook for you and if you need more power then obviously something like the Acer C720, also available with touch is worth paying some extra for. I paid €278 (pre tax, 330 post tax) for this Lenovo N20p Chromebook. For a touch, multimode laptop it’s great value.

Don’t forget to read the latest issues list before buying a Chromebook (yes, we’re working on the ‘advantages’ list too) and check out alternative Chromebooks in our database.

I’ll be at IFA (Berlin, starting on the 3rd Sept) and in San Francisco for IDF so stay tuned for some videos and news. Some of it might even be written on the Lenovo N20p.

If you have questions, leave them in the comments and i’ll do my best to answer ASAP. This Lenovo N20p was bought at Amazon UK. Latest prices available in our database for DE, USA and UK markets.