Don’t expect a huge jump in performance. Intel are quoting 24 percent better graphics performance and up to 50 percent faster video conversion (Intel Quick Sync.) In terms of CPU performance it all depends on the thermal design. Given the same thermal headroom the 5th-Gen CPUs should be able to Turbo for longer until they reach the same temperature but given that most of the new laptops and 2-in-1s using these processors will have a different thermal envelope it will depend a lot on the product. Stay tuned for tests but expect 10-20 CPU performance increase in some benchmarks.

Also of note is the TDP-Down configuration available which will force these CPUs to run down to 7.5W in some cases which means throttled speed-stepping and Turbo and therefore throttled performance. You’re likely to see that in 2-in-1 detachable designs although it’s difficult to imagine that many detachable designs will choose Broadwell-U over Core M – the CPU designed for that very form-factor.

In terms of battery life you’ll probably see about 10-15% improvement being quoted by manufacturers. Intel are quoting up to 1.5hrs on a system with a 40Wh battery and that matches roughly with what Lenovo are saying about the new X1 Carbon 2015 with an increase from 9 to over 10 hours of battery life. Be aware that there’s a new audio decoder in the 5th-Gen Core architecture which will bring good percentage improvements during video playback. In other scenarios the improvement may not be as noticeable.

There are already a few laptops out there using the new CPU. The ASUS Zenbook UX303LA has been listed in various places and the Lenovo X1 Carbon has already been mentioned but as CES kicks off its press day you should expect the list of Ultrabook or Ultrabook-like devices to increase during the next 48 hours. We’ll try to get the products into the Ultrabook database ASAP. 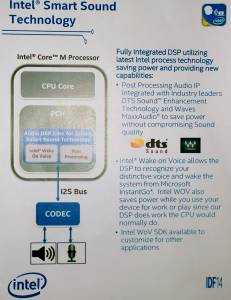 The audio decoding subsystem also includes optional codecs for processing from Waves and DTS along with wake-on-voice features as seen in Core M. There are new video decoding features too.  Decode ‘support’ for VP8,VP9 and HEVC is included but my understanding is that this might not be a full hardware decode.

Support for the latest graphics APIs (DX 11.2, DX 12 Ready) and graphics programmability features, including OpenCL 2.0 and OpenGL 4.3 are included in the HD 5500 and HD 6000 GPU. The Iris graphics HD 6100 appears in 28W Broadwell-U processors and as such is not likely to appear in Ultrabook-class devices.

Also announced today was Intel WiDi V5.1 which can support (given the right WiFi module, software and CPU) up to 4K wireless streaming.

With Core M already on the shelf it gives manufacturers a wide range of choice. Tablet-style 2-in-1s and consumer focused Ultrabook-style devices are likely to use the Core M processor which leaves Broadwell-U for more serious work. Does this mean that we’ll get back to the original Ultrabook laptop formula which was focused on productivity, mobility, battery life and business? We’re hoping so.

The Intel press release is available as a PDF here.