The 11-12 inch screen size is perfect for mobile productivity and with processing power on the rise and design slimming down it gets more interesting every week. Intel’s Core M has a lot to do with the amount of activity in the sector and it might just be responsible for the new Acer Aspire Switch 11 V that got announced today. There aren’t many details available though as Acer only revealed that it would have improved ergonomics and more processing power. There’s one image available too. 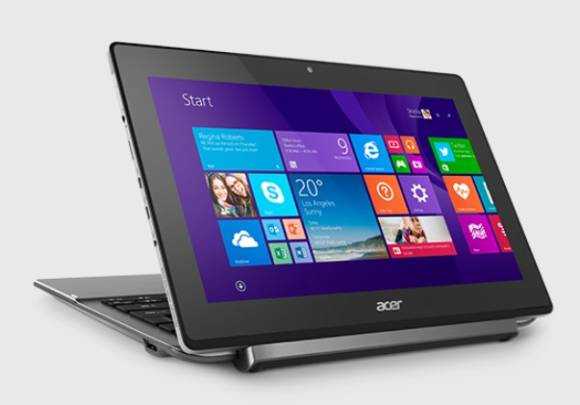 Update: The database now contains all the specifications we’ve discovered from press, hands-on and images.  Keep an eye on the Switch 11 V specs for updates. Most of these are unconfirmed by Acer though.

Given that the Switch 11 was a product that was offered Intel’s Y-Series Cores it makes sense that it will be upgraded to Core M and will become fanless.  Total weight of the current Switch 11 is 1.5 KG so let’s hope that Acer means ‘improved weight’ when they say ‘improved ergonomics.’

Update: Liliputing has confirmed that this will come with a Core M CPU. See the hands-on video below. Acer have also confirmed that there’s a digitizer layer. A ‘active stylus’ will work with the Switch 11 V. There’s an aluminium rear to the tablet which is a good sign that Acer are designing to high-end Intel Core M thermal requirements. The keyboard will be available with additional storage options – up to 1 TB.

Our list of Core-M based laptops and 2 in 1’s shows only three other Core M products with an 11-inch screen. The Lenovo Yoga 3 11 is a single-unit convertible and the Lenovo Thinkpad Helix 2 and Hp Elite X2 1011 G1 are higher-end models so there’s definitely space for the Acer Aspire Switch 11 with a Core M processor.

An Acer Switch 11 with Core M has already been found by TabTech (German) and it’s almost a certainty that the 11V and the SW5-173 found by Tebtech match up. As you can see from the image the design looks a lot better. We look forward to getting more information on the Switch 11V which, given the timescales, is likely to be formally launched at Computex in June.