Intel’s Braswell platform, the replacement for the Baytrail-M platform that you see in many Chromebooks and low-cost Windows laptops under the Pentium and Celeron brand, is now shipping to their customers. Intel claims that it will have 2X GPU performance and that 40 designs are in the pipeline. 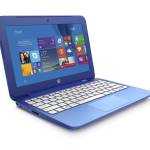 Intel have just finished day 1 of the IDF15 event in China where they’ve announced that the new Braswell CPUs are shipping to customers. Braswell replaces Baytrail-M that has been successful in many laptop and Chromebook designs, NUCs and low-cost desktops and 2-in-1’s. The new CPUs are all built on 14nm technology and will be smaller and more efficient but Intel have also spent some effort on the GPU and are claiming a 2X performance improvement.

Given the higher efficiency there will be some battery life improvements but as screen backlights take the lions-share of battery draing these days don’t expect much. As with the Intel X5 and X7 it’s video playback that will get the biggest battery advantage from all the changes so beware of battery life claims based on video playback. Note that Braswell can decode H.265 (HEVC) video at 4K resolutions with 30 FPS. There’s even support for 4K encoding with the H.264 codec. (Source)

There are four Braswell processors shown in Intel’s CPU database. All four can support 8GB of RAM and have the same features which include Quick Sync Video, Clear Video HD and Wireless Display. The differences between the processors are focused around CPU and GPU clock rates and number of Cores. The Pentium N3700 is the high-end part for now.

All Braswell parts support a SATA 6Gbps interface (the X5 and X7 only support eMMC storage.)

With the main improvements focused on the GPU it’s more of an advantage for gaming on low-cost Windows laptops than it is for Chromebooks although when one looks at the big picture it’s really just about lowering cost. The $150 ARM-based Chromebook is already here so perhaps we’ll see the $150 Intel Chromebook before long.

There’s an important Client Computing Group keynote in day 2 of IDF15 so stay tuned for news coming out of that. We’re expecting to see some product examples.

Update: MSI have announced some Mini-ITX boards with the new Braswell CPUs but there’s no availability info at the moment.