Miracast supports up to 1920 x 1200 60 fps source streams transmitted using the (lossy) MPEG2 standard. There’s 2-channel compressed or uncompressed digital audio or Dolby AC3 streams for surround sound. HDCP is supported for content protection. The optional back channel (UIBC) can be used for human-interface devices or for general data, eg. USB. There’s obviously a latency introduced into the stream and we’ve seen that range down to 70ms in the WiDi implementation so this is not for action-gaming.

We tested the latest implementation on Windows 10 (Build 10074) and an Actiontec ScreenBeam Pro with V1.2.7.0 firmware and the results are in a video below. We couldn’t find the beta software mentioned by Microsoft but were impressed at the ease of setup and the very low latency on the mouse movements. Larger screen changes will increase the latency and our test showed around 120 ms in a stopwatch image test. 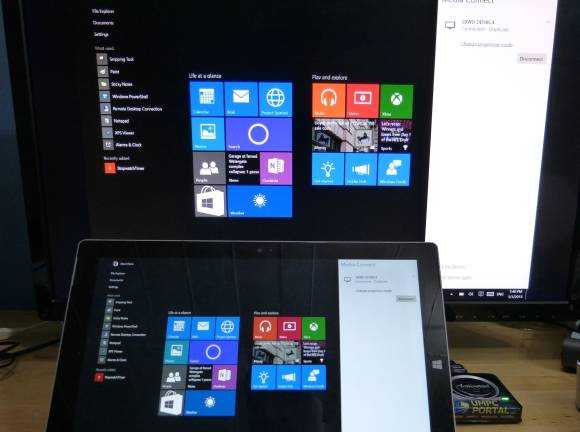 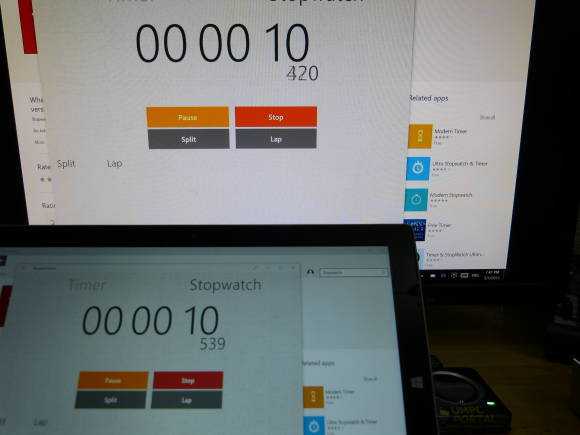 The Actiontec Screenbeam Mini has been available in the USA for $39 but it’s currently $49. Check our Amazon link on the right for the latest US price.

In the presentation at BUILD Microsoft demonstrated direct-casting for media elements which makes the process even simpler. These are being built into the Microsoft Edge browser (was Project Spartan.) Device picker elements are available too. If you’re wondering about Chromecast-style casting where the controller instructs the remote device to run an application (and stream the content directly from the source to the device and not via a screen cast) then you’ll be pleased to know that the DIAL (Discovery and Launch) protocol is being supported. Surely this means that Microsoft will bring out an Xboxcast device to compete with Amazon and Google soon but today it means that you can remotely start the YouTube and Netflix apps on an Xbox One. 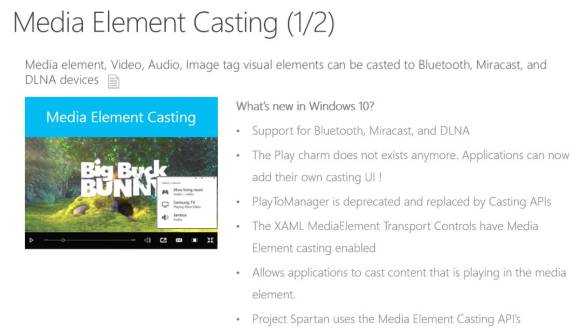 Demo and overview from BUILD 2015. (Slides and video)