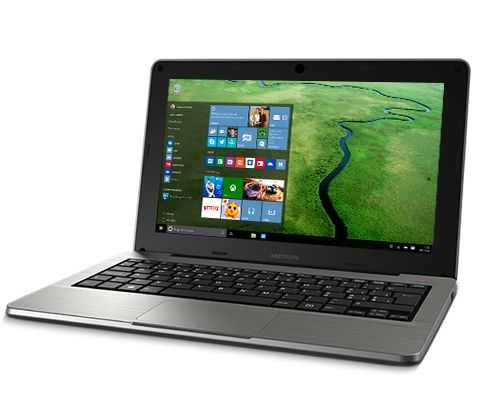 Based on tweets seen from the UK some stores only had one S2218 in stock and  customers weren’t happy.

@AldiUK frustrated at turning up at radford rd,coventry before store opens to buy a Medion notebook that there was only 1 available #noluck

@AldiUK got to Haverhill store at 8 to be told they received just one laptop? Frequent shopper at Aldi but that's pretty disgusting

Kev Wright of TechtalkUK bought one in Aldi this morning and he reported 5 being in stock.

Larger Aldi stores have more in stock but with nearly 700 stores in the UK and Ireland you can get an idea of how many will be sold today. Across Europe next week the total sales numbers will probably be between 5000 and 10000 units. (2400 stores in Germany, 180 in Switzerland, 430 in Austria, 80 in Slovenia for example) and it could spread across the whole of the Aldi network. That’s over 10000 stores!

[22:28] @kevwright has done some testing for us and we’ve got this new information to share.

Do remember that the German version going on sale next week for €239 has 64 GB storage, not 32 GB as in the UK.

[22:39] MarkOne sent in a comment on this post and says: “But what surprised me the Display, it’s one of the best netbook displays which I have seen on the market. Compared to the Asus X205TA its much brighter and the colors are much nicer too.”

We’ve just added the S2218 to our database and will be adding videos and important links as we find them. Specifications are nearly complete now.

Information about each currently installed battery

[23:07] The sound quality of the speakers is “surprisingly good” (Reported by MarkONE via comment.) It looks like The Akoya S2218 will make a great in-long-flight video player.

To round-up the customer feedback today we’ve got a post from @kevwright in the UK which gives us a mini-review of the Medion Akoya S2218. Mini review here, extracts and comment (with permission) below.

“It is attractive, completely plastic of course, and quite lightweight without being flimsy.”  Chippy says: Two people have commented that the unit looks and feels good. This is a great start!

“I have installed only Chrome, and deleted McAfee Live, and have just over 12GB free. I am sure I can delete a few more apps, so you can probably free up a bit more.” Chippy says: I expect that a few GB can be recovered as I’ve heard that there’s a Cyberlink media application pack installed. In Germany, the home country for Aldi and Medion, I expect to see a lot more crapware and that’s probably the reason that you get 64 GB storage, for a few dollars more, in Germany, Austria and Switzerland. For the first time on Windows, a ‘reset’ will (should) restore the unit to a basic no-crapware build That hasn’t been tested on the S2218 yet though and I know there have been a few issues reported on that topic. If you’re going to use the Windows 10 reset function, take an image first until there are multiple reports that it works.

Kev reports that a 64 GB micro SD card worked and sits flush inside.

“…the best thing about this machine, the display. I was not expecting that much to be honest, but it is very, very nice.” Chippy says: We don’t have brightness figures yet but we’ve heard that the contrast is good. This 1920 x 1080 IPS panel is going to be great for international flight entertainment. “…this screen puts a lot of far more expensive devices to shame, and frankly, it’s as good as my Macbook Air screen” says Kev.

“…using it for several hours straight, and is just a little warm in one spot on the base.”

“The keyboard is pretty good, not too much bounce, and decent spacing. I am writing this completely on the S2218, and not making too many mistakes! One odd thing is that every now and then, the cursor jumps to another part of the Google Doc, and I am typing in the wrong spot. Very odd but probably just me getting used to it.” Chippy says: Mouse-jump is a little red flag for me.

“This trackpad is OK, but at the moment, I can not get it to either scroll web pages or select blocks of text with a two finger tap. It feels as if it needs some sort of driver installing, and I will be investigating this in the next few days.” Chippy says: The manual reports a multi-touch trackpad but two people have reported to me that it’s not working. This could indeed be a driver issue. Update: Driver fix is available. See below.

One more thing. It seems we’ve found the original manufacturer for the Akoya S2218 in the ECS EF20RA. Spotted at Computex in June by Winfuture (German) and Mobilegeeks (English.) Video embedded below.

28th August. Multiple sources have confirmed that there’s a fix for the trackpad. See this link http://www.medion.com/gb/service/_lightbox/treiber_details.php?did=14621 Thanks Kev, John, Charles.