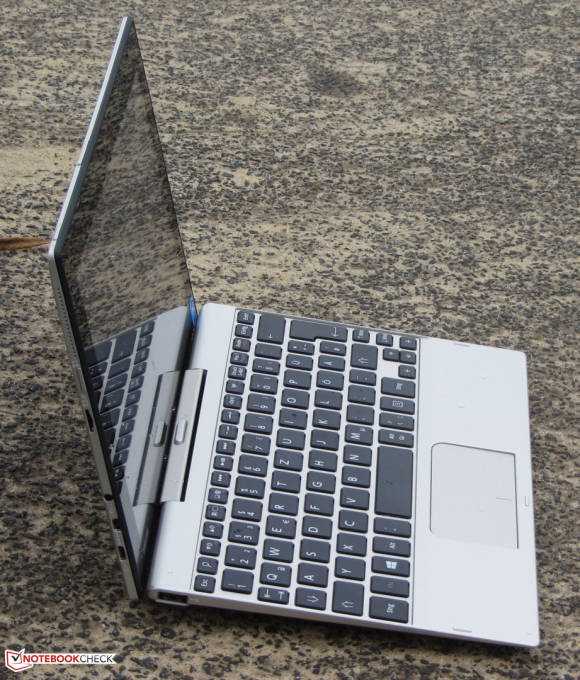 For a start, the Toshiba Satellite Click 10 isn’t in the same league as the Surface Pro. It’s running an Atom X5 Z8300 (low-end X5) but comes with a 1920 x 1200 10-inch IPS screen. The whole setup reminds me of the Lenovo Miix 2 10  but in this case there’s a better keyboard, hinge and a second battery that brings battery life that only the classic Acer W510 could compete with. That Acer was the ultimate weekender laptop but the Click 10 now takes that title. In the Notebookcheck battery life test you’ll see 50% more WiFi surfing battery life than on the Surface 3. 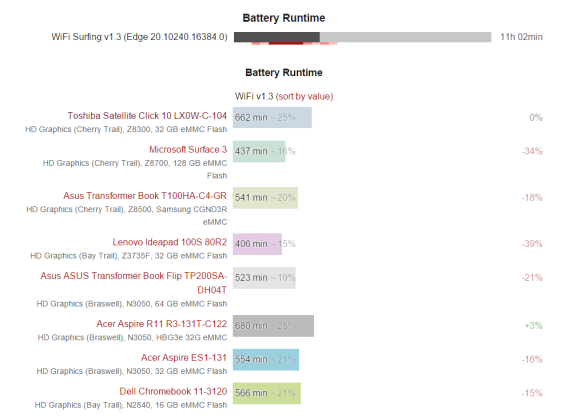 I say that the hinge is better than that of the Miix 2 10 but that doesn’t mean it’s perfect. The Miix 2 10 had possibly the worst ‘hinge’ (actually a groove with pogo pins) the 2-in-1 work has ever seen and while the Click 10 has a solid mechanism it’s a bit of a floppy mess when you touch the screen…which is something you might want to do given the 10-point touch capability!

SSD speeds (eMMC) are OK (Not as fast as the ASUS Transformer Book T100HA) and performance isn’t much better than 2013-2015 Atom-based 2-in-1. The most annoying thing about the setup is that it’s shipped with just 2 GB of RAM. 4 GB of RAM opens more possibility but you’ll have to pay another €150 on top. You’ll get an extra 32 GB of storage (which trebles the usable storage capacity) but then you’re up against the Transformer Book T100HA which can give you 128 GB of storage and a faster processor for much less. The keyboard is a bit crappy on the ASUS but neither of these have high-end keyboards.

The Click 10 is perfect for people who just want basic Windows 10 services. Using the built-in / Store apps is a smooth experience and you’ll get great battery life when watching videos. If you’re someone who wants to push ‘limits’ with 10-15 Chrome tabs, you’ll probably want to go for the ASUS T100HA. However, if you don’t need that battery life, go for the Acer Switch 10E. It’s got a nice, but low-res screen and is perfect for entry-level weekending.

Full review of the Toshiba Satellite Click 10 at Notebookcheck.