The Lenovo Yoga 710 is incredibly thin, light and stylish and it suits me better than my Surface Pro 3 because it’s laptop-first and not tablet-first. This is in fact the nicest 11.6 inch laptop I’ve had in my hands for a long, long time. The 360-degree rotating touchscreen works well, and it’s strong and stable. Open it up and you get a good quality screen experience. The metal casing feels strong and looks great. 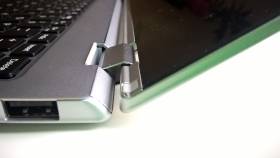 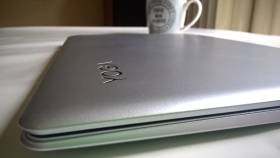 There’s an Intel Core m5-6Y54 and 8 GB RAM inside this version (a Core m7 version with 4GB was also seen at CeBIT a few weeks ago and it’s possible there’s a low-cost entry-level model with Core m3.) The 256 GB SSD (NGFF / M.2 SATA-connected) is a LiteOn module here but the Core m5 version used a different module so it’s possible that Lenovo haven’t decided on a final supplier for the SSD. All I can say is that the model we saw at CeBIT was fast.

All versions of the Lenovo Yoga 710 are fanless and this Core m5 version is noticeably swift in web-based scenarios. I can’t tell you anything about long-term load performance because of heat and throttling which is an area where Lenovo will be making final adjustments before availability. Remember that the Core m processor is very susceptible to heat and can down-clock quickly if thermal design isn’t perfect. If the design is good the Core m7 version could be a performer.

Sunspider, a sub 30-second web-focused test, scored a good 130 ms with Microsoft Edge. That’s ultrabook-level performance and a clear indicator that you’ll be able to run web-apps without problem. Browsing is smooth and fast and the WiFi appears to be strong. Core m-based PCs tend to work well in sub 30-second bursts and web browsing fits perfectly into this scenario. There’s an AC dual-band module inside (Intel AC 3165 in the model I tested) that seems to be strong. I haven’t had any WiFi dropouts.

The Intel HD 515 graphics should support older PC games at low settings, Minecraft and all the Windows Store games.

There’s no pen support on the screen which is probably a sensible choice given the laptop-focused ultra-mobile design. 10-point touch works well.

The keyboard is what you might call high-end Ideapad. It’s not a high-end backlit unit but it’s stable and gives great press-through feedback. I really, really like it. The touchpad is as big as it could be on a 11.6-inch unit and is easy to use. Mouse click points are exactly where they should be. Function keys are reversed and give useful access to camera, touchpad, airplane mode and screen-lock toggles. 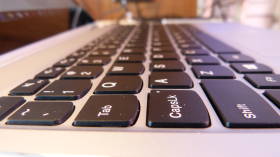 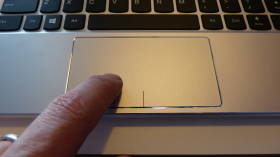 There are a limited number of ports on the Lenovo Yoga 710 but surprisingly Lenovo didn’t go for a USB-C port. One USB 3.0 port, a micro HDMI port, headset and power port give minimal but classic interfaces.

Audio quality is reasonable although there’s a lot of Dolby Audio DSP being applied. It’s interestingly three-dimensional but not my cup of tea. You can turn it off and you’ll get a flatter but loud and clear response.

The 11.6-inch full HD (1920 x 1080 resolution) screen is really nice. Wide viewing angles, good brightness and, to my eye, good color and contrast. A full test is needed for the complete set of performance results but I don’t see it having any major issues and I can’t imagine that Lenovo will change the panel before final production.

A 40 Wh battery in a 1KG (measured 1.035 KG) is a good size. Lenovo are quoting an 8-hour battery life and I see no reason why you wont be able to enjoy 8 hours of full-HD video playback and medium brightness settings. Perfect for long-haul flights.