I Want Android @ Home… In My Car 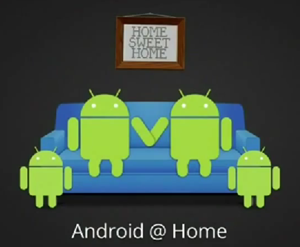 Back at Google I/O 2011, Google announced something called Android @ Home, which seeks to allow a huge range of accessories and appliances to interact with Android devices. I want my vehicles to be Android @ Home accessible more than stuff in my home, and I’ll tell you why.

Google did some brief demos on stage showing rudimentary integration between an exercise bicycle and a phone, and they also show how you might be able to automate your home by controlling lights, the thermostat, perhaps your coffee maker, etc. Watch the following starting at 6:15 to get a brief idea of the vision behind Android @ Home:

Where I really want to see Android @ Home though is, (oddly enough) not in my home at all, but rather in my cars.

We have 7 drivers in my family, and we’ve got three cars to get us all where we need to go. Between jobs, appointments, vacations, etc. organizing all of those cars is a serious task. It’s not fun getting off the phone with a friend and saying “sure I’ll be right there” only to go out to the driveway to find that all of the cars are gone! Then you’ve got to call around to various family members to find out who is where and who will be home first. Equally frustrating is getting into the car to go somewhere only to find that the tank is completely dry and that you’ve got to add a stop at the gas station to your itinerary. Android @ Home could easily fix all of these problems, and more.

If all of our family cars were Android @ Home enabled, not only could they report their positions to an app that everyone in the family has access to, but they could also report their gas levels.

People want their privacy sometimes, so you could always set the app to not report exact car positions, but rather just say whether or not they are in the driveway. This way, I wouldn’t have to peek inside the garage or in the driveway to see if any cars are available.

If I needed a car, I could select the car I want and query the car for its distance so I would be able to easily see which car is nearest, and who I should call to ask them to return the car.

With gas indicators within the app for all cars, you’d easily know if you needed to fill up before running to your appointment, rather than being surprised at the last minute and being late because of a surprise empty tank. Thanks to the connected nature of our devices, the app could even tell you how much gas costs at your local station so you know exactly how much cash you’ll be putting in the tank.

And who likes getting into the car in the summer and sweating until the AC really gets going, or freezing in the winter until the heat turns on? Android @ Home enabled vehicles could cool or warm the car before your morning commute.

And how about running out in the pouring rain to close those windows that you left open? This could easily be done from an app.

Ah! The possibilities are nearly endless and all very useful!

We’ve got the technology to make this happen, and Google’s Android @ Home project makes it easy to integrate. Here’s to hoping we see this sort of smart-automation at a consumer-available level in the next 5 years.

It would certainly make my life easier. How about you, what feature would you want the most from an Android @ Home enabled car? Brainstorm away!