Android is a wonderful phone OS, but Google’s choice to leave the pushing of updates in the hands of OEMs or carriers is a real sour-point for the otherwise praised mobile OS. Hopefully, that’s about to change.

Time and time again we’ve heard stories of devices that have been waiting to get major Android updates for months after Google officially releases the update. In many cases, promises are made by carriers or OEMs and then broken, leaving users clueless as to when (or if) they’ll be seeing the latest Android version on their device.

At Google I/O 2011, Google has announced that it is now working with a group of partners to “create new guidelines for how quickly devices will get updated after new Android platform releases.” Google also says that they’ll be agreeing on, not only how quickly devices get updated, but also for how long they’ll be guaranteed to see Android updates. At the present, Google and the partners are announcing that devices will receive Android updates for 18 months after launch. This is great news with one caveat: Google mentions that the 18 month update-guarantee only holds water “if the hardware allows.” It’s unclear exactly who will determine whether or not the hardware will “allow” the update. Surely there will be situations where you might not want a particular build of Android to be pushed through to a certain piece of hardware for performance considerations. But it its up to carriers and OEMs, they may pull the “we aren’t updating this device because performance is not optimal” card, even when it might perform well enough for those who want it.

It sounds as though the group has yet to agree on how long they’ll be expected to push the latest Android version after it is released, and Google is asking us to “stay tuned” for more information about.

The partner-list is impressive so far and hopefully we’ll see more companies getting onboard. Here are the founding members:

This is great news for users and developers. Presently the most popular Android version is Android 2.2 with 65.9% of devices accessing the Android Market over a 14-day period. Version 2.1 still holds a strong portion of the version market with 24.5%, with the remaining 9.6% of devices being spread across five other versions of Android. 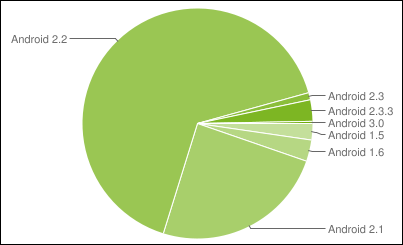 For a developer, this is a nightmare. Optimally you’d like to have every device using the same firmware so that you know that every device has the same capabilities on the software level. You’d also like to have all of the devices on the latest version of any given software, but it turns out that only 4.3% of Android devices are running 2.3+.

For the user, guaranteed update speed and longevity is an obvious bonus because it means that you won’t get left in the update-dust after six months of owning a new device. You also won’t be left waiting months to get the latest speed enhancements and innovations that other devices enjoy from the day that a new version is released.

I hope Google is smart enough to come up with a nifty name for the group that’s agreeing to these guidelines, and a shiny logo that they can slap on the box of participating devices so that customers can easily identify which devices are guaranteed to get this special update treatment.

Here’s to hoping that this greatly changes the Android update-landscape as we know it today.