New Journalism without Euros. How a small Ukrainian newspaper is tackling change.

As part of a training event with Deutsche Welle in Ukraine this week we  visited a local newspapers offices. The small team at Molbuk.ua, Molodyi Bukovinetz, are approaching the question of print vs online with limited resources in a country where honest reporting is becoming more and more important.

END_OF_DOCUMENT_TOKEN_TO_BE_REPLACED

Thanks to Al Sutton of Funky Android at Droidcon NL in Holland this week I got a lot of hands-on time with a retail version of the Sony Tablet P that has just arrived on the shelves in the UK. It’s the Psion 5-like dual-screen Android clamshell that I found quite exciting at IFA in Sept. It may look strange but there’s some nice mobile usability features tucked inside. Sony have done a reasonable job of optimizing Sony apps and gaming capabilities for the screen but there are some issues with standard apps and text input which mean the Sony Tablet P may only be interesting for people wanting the Sony media and gaming experience.

In terms of size and weight it feels a little bit dense but it’s about the same weight as a Samsung Galaxy Tab. It fits into most pockets for short term transport but it’s very thick indeed. Its design certainly doesn’t shout ‘manly’ either.

Although there’s a gap between the screens I found myself ignoring it when reading content. It was great to see a full readable version of Carrypad across the screens and the Tablet P could make an interesting page-per-view reading device. The split screens bring a little issue when dragging across two screens. When the contact is lost the dragged item gets dropped.

Thumbing is possible in portrait or landscape but I didn’t find it as easy as the Galaxy Tab in portrait mode and the sharp corners dig into your hand. Angling the screen closer to 90 degrees allows a level of table-toppecking but there’s no haptics and its a little hit-and-miss. You certainly won’t enjoy inputting large amounts of text in this way. Again, I find a 7″ portaint-mode Thumbing experience to be much more comfortable.

I tested a number of apps and was impressed with the amounts of content being presented to me but many apps default into a single screen view. Using Honeycomb’s stretch feature apps are encouraged to spread across with screens. This isn’t always successful though. Google Reader refused to expand and crashed at every attempt. I saw other apps doing this too. This is a critical problem.

Having a removeable battery is a real advantage to the ultra-mobile user. Battery life looked, after a few hours of testing, very similar to that of the Galaxy Tab 7 – 6hrs screen-on usage over an active period of 12 hrs. It’s not quite all-day capable if you’re relying on this for some productivity.

The Sony Tablet P is an interesting mobile device with some unique and useful features but text input was a little clumsy due to an uncomfortable thumbing grip and lack of haptics. Desktop-pecking is possible, but not efficient.  It seems that gaming could be the only serious unique feature here and I haven’t tested it. If that part of the device works well it’s the entertainment user that is the only type of user that really needs to take a close look at the Sony Tablet P. The reading experience was good and the Tablet P is easy to hold but the weight needs to come down a bit to match some of the best reader-capable tablets. Others looking for a more mobile all-round Android experience may find more pleasure in the Samsung Galaxy Note or 7″ Android slates.

Re-Gaining my Blogging Momentum with a Slimming Exercise

I can’t deny that my sites (UMPCPortal, Carrypad) growth has been stunted by my reduced attention span in the last 18 months. Two important family considerations (both good!) have hit my working day very hard and I’m struggling to fight my way back into care-taking the sites as I should be.  I don’t want to give details but a baby and a hard-working, successful wife gives you a clue.

In addition to the time issues, there’s also the tablet crave.

I am, quite frankly, struggling to keep up with the short-form coverage [that’s a polite way to put some of the content i’ve seen recently] coming from established tech sites.

I’ve lost all of my blogging momentum as a result of these two issues. One took the time away, the other took some of the desire away.

END_OF_DOCUMENT_TOKEN_TO_BE_REPLACED

Steve has already talked about the camera quality on the Compal MID today, but I wanted to quickly mention the video quality. I think I’d agree with him that video side is a little disappointing.

â€œVideo quality on the device I have here isn’t up to the same quality as the images unfortunately. The quality is low-end smartphone level and should really be much better, inch wrote Steve.

I think the first thing to note is that video in a MID device has two core uses. The first is video telephony, especially online using IM services such as Skype. In that sense having a small screen and sometimes poor definition is expected, and thus the Compal is comparable to the built in camera on mid-range laptops. Unless I specifically say that I’m on a MID device, video chatting

It’s when you look at recording and editing video for upload to services like YouTube or Vimeo that the Compal starts to fail. The video that I have recorded on the Compal, even when viewed on the device, has a habit of the audio being out of sync with the video. That’s not something that is acceptable for any sort of internet video work.

This is something I see in many devices, and it normally comes down to a log-jam somewhere in the hardware. The obvious culprit is processor speed, but I don’t think this is the case here â€“ I’d be more inclined to look at either the amount of data that can flow from the camera circuitry, or the write speed to the memory chips. If either of those is slow, then there will be a lot of video recording problems.

Early smartphones had the same problems, and as technology improved (and the phones had a guaranteed ‘ inchthis will sell X hundreds of thousands of units", inch the price of components came down till they were able to cope with the flow of information. MIDs are still in their early days, but as they develop and mature their markets, the same economy of scale should improve their media capturing quality in the same way. Wibrain i1 and a Geo-Enabled Media Tour. 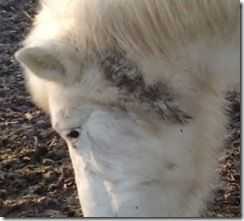 I took a walk to the horses this afternoon; a live media-walk for MIDMoves to test out some geographically-tagged capabilities on the big Web thing. Tracking is nothing new. Location-based tweets and near-live video posts are nothing new. Putting it all together in a media-rich way and being able to show it live is something different though. It highlights the difference between a smartphone and a PC-based MID or UMPC. There’s just no way you can tie all the components together and post-process it into a presentation like this with a smartphone. Having access to full-screen Web2.0 applications and smooth multi-tasking was the key here. There’s lots of improvements that can be made but this is a great step forward for live, media-rich tracking.

Move and zoom the map below and click on the icons for videos, audio recordings, tweets and images.

Watch out next week for a very special live geo-media tour on MIDMoves.