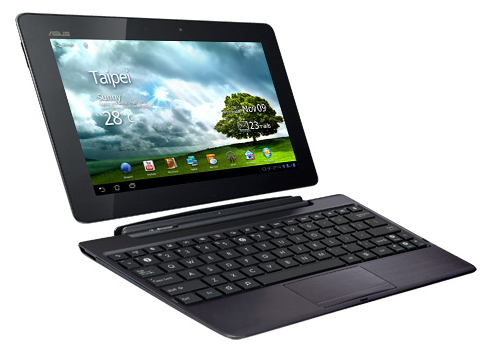 It would appear as though the product page has gone live earlier than intended as Asus is still advertising for the original Eee Pad Transformer on the front page of their site. Additionally, the Transformer Prime micro-site still shows the “Prime is Coming” teaser text. Though we already know most of what there is to know about the Transformer Prime, the official product page gives us the first official list of specs as well a the user manual of the upcoming Tegra 3 tablet.

The launch of the official page may indicate that a Transformer Prime release date is not far off.

We can also finally see the two colors (Champagne Gold, and Amethyst Grey) that the Transformer Prime will be available in, thanks to some new photos: 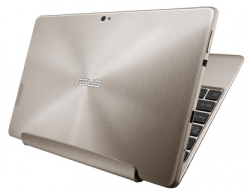 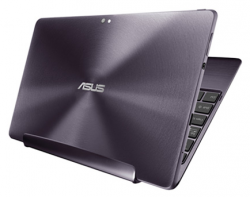 Though most of us glaze over gadget manuals, I’ve come to find that there are occasionally great tidbits to be found within. Thus, I’ve done you the courtesy of pulling out some of the good nuggets from the Transformer Prime manual so that you don’t have to.

From the manual we can see that you won’t get anything too exciting out of the box, which comes with nothing but the Transformer Prime itself, a USB charger, regional wall adapter, docking-to-USB connector, manual, and warranty card. And yes, you read that correctly — the keyboard is not included standard, it’s an accessory that will cost you $149.

The manual also tells us that the trackpad on the keyboard dock has two defined areas that will function as left and right mouse clicks. This will surely be handy for VPN applications (like the built-in ‘My Desktop’) and make the Transformer Prime even more capable of functioning like a full-blown computer:

Among other keyboard shortcuts, pressing the Fn-key along with the Up or Down arrow keys will jump to the top or bottom of a given page respectively.

We can also peek at some of the customizations that Asus has made to Honeycomb which runs on the Transformer Prime. Most interesting among the adjustments to the quick-settings panel. There is a special screen-brightness button that you can press to boost the screen-brightness for better outdoor readability. There’s also a performance toggle which can switch between Power Saving, Balanced, and Normal modes. It’s unclear whether or not these settings will impact the clock speed of the Tegra 3 hardware or simply adjust some of the system settings such as screen timeout and background app updates: 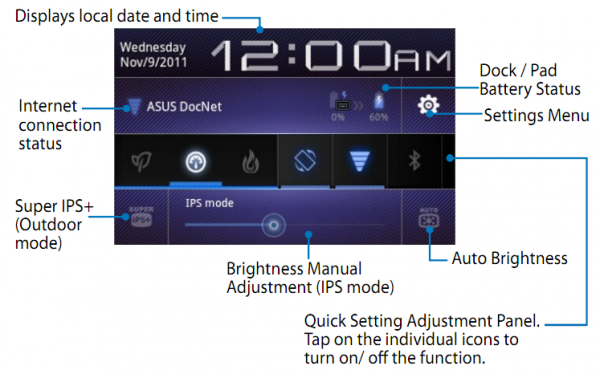 For the original Asus Eee Pad Transformer, one of the popular tweaks was to download a widget that would independently display the battery life of the tablet and the keyboard; by default the system only specified the overall battery levels. This time around, Asus is adding that funtionality out of the box. Thanks to the Asus Battery Level widget, you’ll be able to see the charge of the keyboard and the tablet without having to download any third-party applications or widgets. In addition to the widget, you’ll be able to see the battery levels on the notification bar and in the quick-settings panel.

If you’re curious about the supported media formats for encoding and decoding on the Transformer Prime and Tegra 3, the manual gives us full details:

The Transformer Prime comes with the MyLibrary app which seeks to compile all of your eBook into one place (something you’ve probably been longing for if you’re like me and have eBooks across Amazon, Google, and more). MyLibary supports ePub, PDF, and TXT and has your typical page-turning interface on a sepia background. 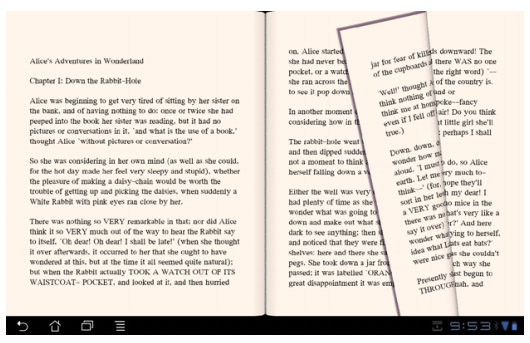 If you are thinking about using your Transformer Prime for enterprise work, Polaris Office is another included app which will be handy for your document editing needs. You can hook up your Google Docs or Box.net account to the app for some cloud storage action. It supports the following:

Asus is including the SuperNote app which will let you take hand-written and typed notes, completed with photos, audio recordings, and more. Without an active digitizer and stylus this seems somewhat out of place, but I suppose this will be enjoyed by those who can get along with capacitive styli.

In the download section of the official Transformer Prime product page is a section called ‘Source Code’. This 89.9MB file is presumably the Transformer Prime’s software image, and might be useful for those hacksters over at the XDA Developer Forums.

Pricing for the Transformer Prime starts at $499 (+$149 if you want the dock) but the release date has not yet been announced.