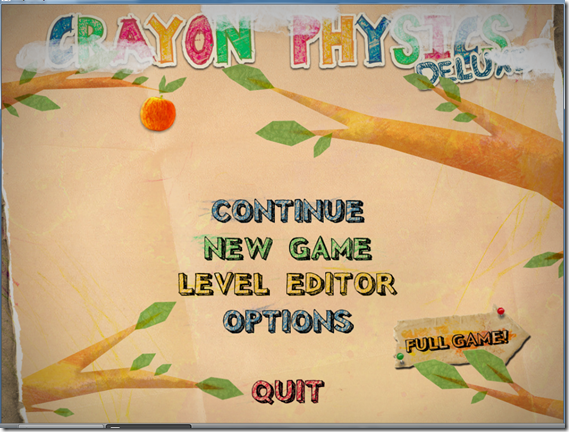 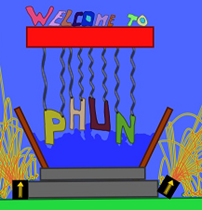 Have a look at Phun, the free physics sandbox, available for Windows, Linux, and Mac OSX. I’m really excited to share this game with any touchscreen users out there because it is really well made and lots of fun if you like to create and tinker.

Phun is not a goal oriented game. It is more of a playground, or a sandbox if you will. You have at your disposal many different tools to create whatever you can think of. You are essentially using these tools to create objects and see how they act and react given the properties that you have specified. Tools range from simple circle and box creation to more complex and interesting mechanics such as the spring tool which allows you to couple objects together with springs that are totally adjustable by the user (things like spring strength, dampening, etcetera).

The great thing about this game, with regards to touchscreen users, is that just about every adjustment can be made on screen using your stylus. The major tools are represented with nicely sized on-screen buttons and it makes them easy to select with the stylus. Right clicking on any object brings up a menu with lots of options that are specific to each object. For example, right clicking on a block will allow you to change its density, friction, color, and lots more. Selecting the object menu from the top bar without having anything selected brings up a small window that will make it really easy for touchscreen users to navigate. See the video-demo below.

END_OF_DOCUMENT_TOKEN_TO_BE_REPLACED

Welcome to the second installment of my touchscreen friendly game series (see the first game we highlighted here). Tonight I want to share with you a unique game called World of Goo which is available on PC, Mac OSX, and Nintendo Wii (there is also a Linux beta). Before the game was released it won several awards including the Design Innovation Award and Technical Excellence at the Independent Games Festival. The basis of the game involves creating structures, out of animated balls of goo, to reach the goal. The game is based on a convincing physics system so make sure that you goo structures don’t topple over! The game is $20 for PC, but there is a demo version (linked below) available with several levels that you can test before you buy. I shot a short video showing the gameplay and how it works with the touchscreen:

Again, this game was not designed for touchscreen input, but as you can see in the video, it works with it quite admirably. Here is a link to the World of Goo website if you would like additional information about the game or you are interested in purchasing the full version. Below I have linked to the demo version of World of Goo for PC (there is a Mac demo available, but unless you have a Modbook, you probably don’t have a touchscreen Mac!):

Let me know what you think in the comments. 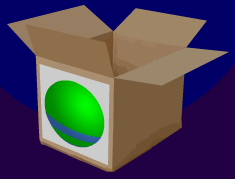 Here is the first touchscreen friendly game that I would like to highlight. It is called Factory Balls and it is a simple flash based browser game. It is a puzzle game which involves taking balls from your inventory and modifying them to match the ball painted on the box. Once your ball matches the ball on the box, the ball will fall into the box and you will move on to the next puzzle. The game is simple at first as you learn how to use tools to modify your ball. As you progress, puzzles will get more complicated and you will have a wider variety of tools to use. Think carefully before you modify your ball, some modifications can’t be undone, and you’ll need to trash the ball and pick a new one from your limited inventory which is reflected across all of the levels. Some of the levels where you use the pump tool to paint a stripe on the ball (like the one pictured) can be a bit confusing. Experiment a bit and you will begin to understand how the different combinations of tool use will effect the outcome. 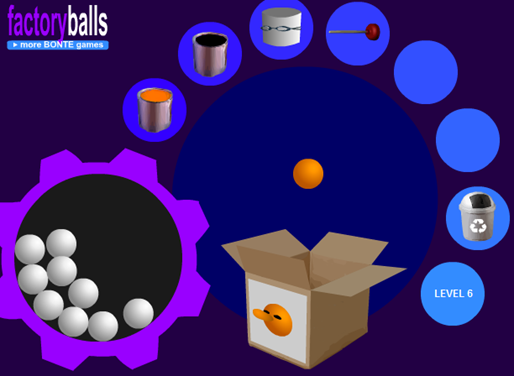 This game functions very nicely if you have a touchscreen. In order to modify the ball, you drag it onto the tool that you would like to use; it is very easy and natural if you are using a stylus. I would put my bet on a touchscreen user over a mouse user if they were in a race to see who could complete the game first. Head over to the site and have a look at this simple, but fun, touchscreen friendly game.

I’d like to take a moment to introduce a series of posts that I will be doing over the coming months. First let me say that I am an avid gamer. Gaming has been a hobby of mine since I was a young lad and it continues to be a fulfilling activity for me. I have experience across several different gaming platforms but the Xbox 360 consumes the majority of my gaming time at this point.

Before I get to off-topic, allow me to explain this series of related posts that I plan on doing: During my travels across the vast sea that we like to call the internets, I occasionally stumble across an enjoyable game that works well with touchscreen computers. Considering the topic of ultra mobile PC Portal, I trust that many of you have a computer with touch screen input (for those of you that don’t, just follow jkk. I’m sure he’ll have a guide on how to mod a touch screen onto your netbook!). Most often the games that I will highlight will be simple flash games that weren’t designed with touch screen input in mind, however they still function well with a touchscreen enabled computer.

My point here of course, is that I would like to share these games with you as I come across them. The games that I highlight will most often be simple flash games that weren’t designed with touch screen input in mind, however they still function well with a touchscreen enabled computer.  So, if you enjoy the occasional casual game, and see a post here with the following in brackets "[touchscreen friendly game]" in the title, have a read and hopefully you find an enjoyable (usually free) game that works well with your touchscreen enabled computer.

Please feel free to drop a line in the comment section if you already know of any good games that work well with a touchscreen!