Asus Eee Pad EP101TC; out with the Windows 7 Embedded, in with Android. 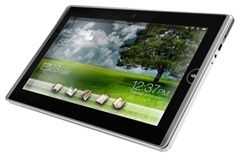 Back at Computex Asus announced two new tablets, a 12 inch touting Windows 7 device called the Eee Pad EP121 and the Windows 7 Embedded, 10 inch EP101TC. Windows 7 Embedded runs on the Windows CE platform which Microsoft isn’t pushing as a finalised tablet ready operating system but instead a base in which OEM’s like Asus can create their own user interfaces for.

Which version of Android is still a mystery although rumour has it that it could possibly come with Android 3.0, also known as Gingerbread. If that is to be the case the earliest we would see this device is Q1 of 2011, although with Gingerbreads rumoured support for higher resolutions, this would tie in nicely.