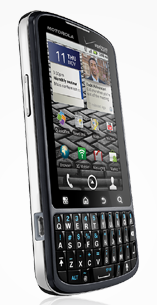 It seems like most of the tech world had come to an agreement that the Droid Pro would simply be the love child of the Droid 2 [product page] and Milestone 2, combining the US and EU bands to form an otherwise perfect replica that would function internationally as well as domestically (with business users in mind).

Instead, it looks like the Droid 2 had an affair with a BlackBerry, and the result is a Droid device which is squarely aimed at business folks (quad-band features included).

The Droid Pro uses a portrait form-factor and has a fixed QWERTY keyboard that is very reminiscent of some of the latest BlackBerrys. It runs Android 2.2 and is mostly on spec with the Droid 2. The only show stopper is the low-res 320×480 capacitive touchscreen.

The Droid Pro is expected to be released on the Verizon network in the US sometime soon.

We’ve got the full official specs in our device database as well as a gallery of renders, check it out!

Hat tip to Pocketables for pointing this out.