EeePCNews.de have a very interesting news article about a possible AMD CPU aimed at netbooks and UMPCs. Its a 64 bit, single core CPU running at 1Ghz with a TDP of 8W. Effectively half of a Turion X2 dual-core CPU. 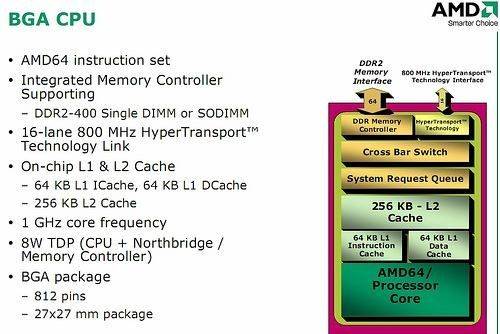 Note that the CPU includes the memory controller (Northbridge) but no Southbridge or GPU. At 8W  TDP, it is an option for netbooks and possibly high-end ultra mobile PC like the AMD ultra mobile PC seen at Computex but unless an underclocked version appears at 5W or less, it’s probably not going to be cool or even small enough to squeeze inside an MID. For that job, only the Atom and ARM-based products fit the bill.