Lets start this article with a poll.

If there’s one thing that always annoys me in the ultra mobile PC category, it’s a wasted chance. Be it poor design, poor software or poor hardware. If there’s one thing that annoys me more than that its when a company makes the same mistake twice. Even worse than that is when the device in question is high-quality in every other respect. Because of this I find the SC3 the most frustrating device I’ve ever owned. I want so much to love it and take it into my daily life but…. 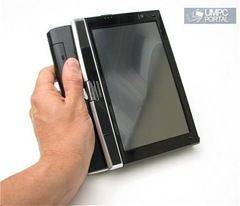 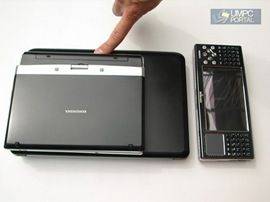 The SC3 is built on what is potentially the worlds most efficient X86 computing platform and its designed to be one of the smallest, most mobile notebook-style devices you can think of. Its got a fantastic specification that includes a bright, LED backlit convertible touchscreen, a full keyboard, ExpressCard slot, GPS, SD, Wifi and Bluetooth and its got real potential to be used productively in places you wouldn’t even think about using a normal laptop. I’m really enjoying the size and form factor but why is it that I’m faced with having to think about an extended battery or power cables with this device? Why is it that its no more efficient than devices I was testing 2.5 years ago? Why do Kohjinsha seemed to have crippled what could have been a leading UMPC. Why is is it that I can’t recommend this as an Ultra Mobile device? Lets get my opinion about the battery life out of the way first and then I’ll give you some more positive angles.

I shouldn’t be surprised about the battery life as I predicted it as soon as I read the word ‘Jeita’ in the Kohjinsha smallprint last month:

Kohjinsha are quoting 3.2hrs battery life with a 20wh battery which results in an average drain of 7W. 7W is impressive but if you read the small-print you’ll see that the tests were done under JEITA conditions. In effect, its a measure of silent-state power drain which has very little to do with using a PC in real-life. As i’ve written before, you need to take 30% off the battery life figure to get a real-life figure. Expect 2-2.5hrs battery life from the SC and an efficiency that’s only a few watts, say 20%, better than the existing UMPCs. [Ref]

Sure enough I was right. 2.25 – 2.5hrs is all you’ll get out of a fully-charged SC3 under normal wifi-on usage conditions. In fact, this morning, with Wifi on, I was seeing 2hrs and 10 mins on the battery meter with a fully charged battery. As you can probably see from the poll results above, that’s not going to impress many people at all. [It won’t impress Zanno either, that’s fur sure!] I wonder if it impresses Intel’s Atom product manager? I’ve spent a lot of time trying to optimise it and working out if there’s a problem with any of the components but no, after all my testing and discussions with others that also have the SC3, it seems like Kohjinsha have simply failed to make the device efficient enough. There’s that wasted chance.

In terms of build quality, the SC3 appears to be good. It uses the same plastics as on previous Kohjinsha’s and having owned two other Kohjinsha’s in the past, I can vouch for the build quality. There’s no rattle, no creaky plastic and the screen pivot is nice and solid. All the ports are well positioned and it’s nice to see covering flaps for some of them. It helps to keep the device looking smart. Keyboard buttons are well engineered and respond well. Even the mouse pointer buttons, often a problem with previous Kohjinsha’s I’ve found, feel great. Top marks for build quality.

The keyboard is of course, tiny. Its smaller than previous Kohjinsha keyboards and any attempt to touch type in a normal fasion will have you tripping over your fingers and making mistakes. Its a two-finger method that needs to be employed here which will give you a fair typing speed. Much better than a split keyboard or a thumbpad. Even holding the device with one hand and typing with one finger is comfortable for short periods.

The advantage of that small keyboard is that the device is amazingly small. As a notebook you just have to giggle every time you look at it. Its tiny. As a tablet, it’s not so impressive as the device extends to the rear of the screen. While it doesn’t look that good, its practical. Holding the device with the battery is the natural thing to do. Holding the device as a tablet is also fairly comfortable. Its 300gm lighter than an Eee PC 901 but even so, 800gm is still quite heavy for one handed use. Even so, you will love experimenting with the multitude of ways that it can be used.

And on to Vista. I have Vista Ultimate installed and yes, it works. Its not as slow as I’ve seen on A110-based Intel devices but its not fast either, even with the 2GB upgrade that I’ve done. Windows take noticeably longer to open than on my Q1 Ultra with XP and starting up Firefox for the first time can be a 7-10 second wait which, when you do it as much as I do, becomes annoying. With Vista effects tuned down and the floating tip removed, there wasn’t much improvement. I really suspect that the drive is to blame for much of this at a maximum 25MB/s, its not that fast. [I’m looking into upgrade possibilities.] Overall though, its good enough for occasional use which is exactly what the SC3 is designed for.

If you were expecting exceptional video performance from the Poulsbo chipset as I and many others were, you’re going to be disappointed. Poulsbo has very little 3D performance which means that even Google Earth doesn’t render smoothly and the built-in video decoding hardware just doesn’t seem to be reaching its theoretical performance. I’ve done a lot of testing in this area over the last 24 hours and I’ve come to the conclusion that Intel might not have finished the drivers. YouTube works smoothly and most, if not all the video you’ll find on the Internet as streaming media will work but medium bitrate WMV, H.264 (over 2Mbps) just wont run smoothly, especially in fullscreen mode which becomes jerky and includes a lot of tearing. I was even seeing display errors with lower bitrate WMV under Windows Media Player. As for Media Center, move along please. Its too slow under this hardware. I’m in contact with a few people about the Video drivers to try and determine the status here but for the time being, don’t expect anything impressive on the video front.

Overall, its designed well enough to be an excellent UMPC. You really can use this in places where something like an MSI Wind won’t go. Its a device you can keep near and put into the smallest of bags. In fact, if you’ve got the money, buy one of these just to have in your bag at all times. Its the perfect short-use ultra mobile PC!

Despite all the great features of the SC3 I can’t help but feel disappointed. It reminds me of the SH6 and even the Amtek T700. Both devices were capable of so much more in the battery life department. If you want 3hrs+ battery life built into your UMPC, this isn’t the one for you. If you’re happy with 2.5hrs battery life and don’t need high-end video playback though, this is a stylish, mobile and productive ultra mobile PC solution.

I’ve done a photo shoot of the SC3 and all the images are now in the gallery here.

Pocketables have another review of the SC3. Take a look over there for a second opinion. As we find links and reviews, we’ll be adding them to the product information page so check back there for the latest.

The SC3 was imported from Direct From Japan. They also have the base version of the SC3 available with Vista Ultimate. They also include free shipping so check them out for prices and availability.

My testing continues. I’m making notes in this forum thread.