The Q1 Ultra has been my main mobile device since I switched from the Raon Digital Everun some months ago. It has been a near-perfect solution for me and having the SSD, HSDPA mods and optimised Windows XP solution has elevated it above all the other UMPCs I’ve owned or tested. It’s even convinced me that a 7" Windows-based ultra mobile PC is more suited to my business needs than the 4.8" Carrypad device I wanted before. That’s a very significant change in my requirement that I’ve already started to write an article about because it means that i’m no longer looking for a MID as my single Ultra Mobile computing device. I’ll try and finish that article this weekend. 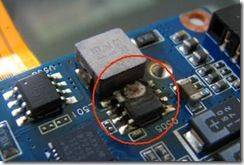 But…the Q1 Ultra is dead now (RIP, friend) due to an accident with my charging solution last Friday. The overheated MP3400 charger appears to have shorted and killed the battery charging circuitry in my Q1 so now the Q1 only works on mains power. The Q1 Ultra charging circuit appears to be beyond repair (see image.) so now I’m in the position of having to choose a new UMPC. Here’s what I’m looking for…

I was going to switch to the SC3 for the time being but some time with it at the weekend reminded me how battery life is so important. Performance isn’t up to my requirements either. The form factor is great (apart from lapping) but without that battery life, I can’t rely on it. I switched over to the Wibrain for a few hours after that and then found it getting warmer than I like to have in two hands. The main problem though is that it can’t handle table-top operations. 7" is entry-point for that. Basically, the Q1 Ultra is the only choice for me at the moment so right now, i’m looking at to see if I can get the cheap Q1 Ultra C from Hong Kong.  Psychologically, it will be difficult to spend money on the same device but it says a lot about a computer when, after 1.5 years, the best option is to get the same one! For many, the device is far from perfect. For me, it’s really hitting the mark. At least i’ll have a lot of spares if I buy a second one!

Oh the frustration of choosing a new device! Has anyone got any ideas for me? Did I miss something?