USI have just sent us details of the USI MID-160 tablet-style Atom-based MID. Linux Devices reported on it a few days ago but it looks like they didn’t have the latest images. Pictures first, details afterwards… 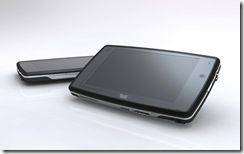 Larger images in the gallery.

Lets not let that beautiful, stylish, sexy, desirable ID get the better of us before we’ve looked at the press release and specs though…

October 21, 2008 (Taipei, Taiwan): USI, a leading DMS company, showcased the world’s thinnest Mobile Internet Device (MID) based on the Intel® Atomâ„¢ processor at the Intel Developer Forum (IDF) in Taipei, Taiwan. The USI MID-160 is a good example of USI’s expertise in miniaturization technologies and systems integration and will make it possible to enable consumers to carry the full Internet in their pockets.

The MID-160 adopts a 5-inch 800Ã—480 pixel touch screen with 167,000 colors in a seamless ID design. With a 250g weight and a 1.5cm thickness, the MID-160 is the thinnest Intel Atom processor-based MID launched to-date in the world. Supported by an 8GB solid state disk (SSD) and with a microphone and instant communication softwares installed, users can communicate on the Internet anywhere at any time, achieving the aim of communication without borders.

Gilbert Wei, President of USI, indicated that USI began its R&D efforts for MIDs in 2007. In order to make the MID thin and light, MID-160 uses an in-house small footprint WiMAX SiP (system in package), a dual-band WiFi/WiMAX module, and a 3G module from Option — all packaged into a device featuring a customized ultra-thin 5-inch panel display.

Our GTM501 device the world’s smallest HSPA module has been specifically designed to make MIDs truly pocketable. We’re delighted that we’re able to support USI in the development of such a compact and well-connected MID. inch said Jan Callewaert, CEO of Option.

According to USI, through this in-pocket, ready to service MID, users can enjoy a PC-like internet experience including browsing the Internet with Flash and the latest web technologies. MID users can also connect with families and friends and enjoy full access to rich email including attachments.

The first thing to note here is that it hasn’t got a keyboard. Half of my brain right now is saying ‘Forget the keyboard. It looks great!’ though! 250g is super-light too. On the images, we can see a few other specs.

I don’t see a USB port but it’s not possible to see the LHS of the device in these images.

Also missing from the press release or email we received is any indication of CPU speed, price, availability and territory for this device. I suspect that because the device is an OEM device, you won’t see it sold under the USI brand so the CPU is variable between 800 and 1.1Ghz depending on USI’s customer requirements. Because it’s an OEM device it also means that it could be some months before USI’s customers push this through, if indeed they have any customers. The press release could in fact be aimed at getting a customer which means 3-6 months before you get it in your hands.

Naturally these questions, along with a request for a sample have already been sent to USI! I will put the details into the database as soon as I’ve hit ‘send’ on this.