Always-on FIE Mobile Computing with the Wibrain i1

This week it’s been my great pleasure to be testing another ultra mobile PC based on the Intel Menlow platform. It’s not my first as I’ve had the Gigabyte M528, Aigo MID and Kohjinsha SC3 but there’s a couple of things about this Wibrain i1 UMPC that are worth talking about and one of them is a real first in the mobile computing world and has got me all fired-up about UMPCs again. I’m not talking about the competitive pricing, hi-res touch screen, usable keyboard or built-in 3G. I’m talking about the battery life. 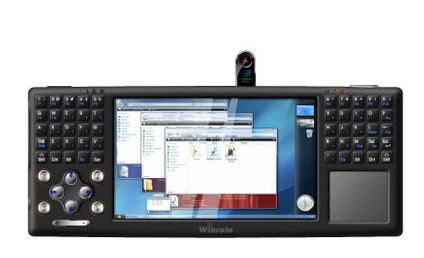 As you might already know, the Wibrain i1 is a Windows XP PC in 500gm with a 4.8″ screen, 1GB RAM and 60GB drive. It retains many of the old old Wibrain B1 spec’s and design but the i1 uses the Atom CPU, adds an SD card slot and includes, as an option, built-in 3G. It’s brick-like and far from being a design piece but what it lacks in looks, it makes up for with exceptional usability. I’ll be writing a lot more about it soon but right now I just want to highlight one aspect of the device.

I’ve you’ve got a Fujutsu U2010/U820 with an extended battery or the original Everun with the extended battery you might be in the same position where the battery life is SO GOOD that you can turn it on with a full battery in the morning, lock the keyboard and screen and it will run for a full work day without it having to go into standby. I’ve done real start-to-finish tests where the i1 has run for over 12 hours. The screen was off and the Wifi was disconnected but with a brush of the mouse pad and a flick of the Wifi switch, it was ready for online action. I’ve also done tests with the device connected to the GSM data network (which takes less power than the higher-speed UMTS networks) and it has shown battery life figures that indicate up to 7hrs connected time. It could be even longer than that as I haven’t done any optimisations to the XP build. The drive doesn’t spin down so there’s obviously room for improvement there and an SSD would probably push it to 8hrs. Maybe there’s even more room for improvements as the device I have here is a factory sample and not a final build.

And this is all with a standard battery in a 500gm handheld package!

To put the battery life into perspective, of you were to attach, somehow,  the 8-hour battery from the highly energy efficient Samsung NC10 netbook, the Wibrain would idle for about 20hrs.  If you were to add 5 spare batteries bringing the weight up to that of the Samsung NC10, you’d have 60 hours of always-on idle or enough battery power for about 30 hours active online usage.

All that and the FIE

Even when you use the device, hard, with full multi-tab web browsing and a few background apps the battery when connected via Wifi is over 5 hours. In those 5 hours you could view 2-5 times as many web pages as on a smartphone because it’s fast too. It passed my sub-10 second load-time test for nearly all web pages and if you install no-script, it browses as fast as anything out there.

I’m not joking. I have no-script installed and with Firefox I’m getting these figures on my local wifi connection:

Once again, note that I have no-script turned on so most javascript is ignored. (The pro bloggers will kill me for mentioning that as it blocks a lot of ads!) Here are the tests results again with no-script turned off.

As you can see, these are nothing short of desktop PC speeds (my quad core desktop can only strip a few seconds off those results. Both the Wibrain and my desktop appear to process the HTTP data as fast as it can come in) and you know that by running Firefox, you’ve got one of the best browsing experiences there is with full plugin support, javascript, security etc etc etc. I don’t need to go on any further.

So there you have it. A fast, useable, well specified, long battery life ultra mobile PC at about 30% less cost (*1) than other 3G-enabled solutions. It highlights how far we’ve come from the 800×480 Celeron driven, CCFL-backlit, 2hr dinosaurs of 2006. Wibrain will, if they get this to market quickly, have some good success with this device. You won’t see a million sales but I bet it outsells the Samsung Q1 Ultra if they get the distribution channels sorted out.

Oh one more thing. I need to blow my own trumpet before I close. My Menlow battery life prediction was right on the money:

“My expectation is that mid-market devices will come in at around 6 hours battery life and that we won’t see them until late 2008.”

Apologies for getting over-excited about the battery life! Thanks to Mobilx.eu for the loan of the Wibrain sample.