A Week On The Road with the Gigabyte Touchnote T1028M 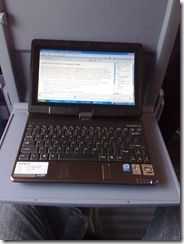 I’m sitting on the ICE high speed train from Amsterdam to DÃ¼sseldorf on the return journey of a combined 6-day business and pleasure trip that has been a big test for the GigabyteT1028M. Gigabytes newest netbook has been in backpakcs, friends houses, in exhibition halls, in cafes, trains and hotels. It’s been used for email, blogging, photo editing, video editing and website administration connected via both WiFi and the retro-fitted 3G module (a Mobilx extra) that uses the built-in SIM slot and 3G antenna.

Right now, as I think about how I’m going to write about how the Touchnote performed this week, I’m really struggling to think of anything that’s wrong with it. Maybe a sharper, matt screen would help and if I’m honest, I don’t like the handbag style case. I’m also struggling to get used to the mouse pointers on the side of the mouse pad but it’s hardly a major complaint. The only significant point to mention would be the battery life which comes in at between 3.25 and 4hrs depending on WiFi On or Off usage. The 6-cell (or a battery pack similar to the one I use) is recommended for anyone wanting to use it for more than a few hour-long sessions between charging.

Nothing much has changed since I gave my first impressions but let me quickly give you the important points againâ€¦.

Overall, the Touchnote delivers a quality experience and given its touchscreen and upgradability, is usable in more scenarios than the average netbook. Its a definate upgrade on some of the earlier netbooks. For me, it’s a significant step up from my Medion Akoya Mini and although I’m interested in the Asus T101H, I don’t see a reason to wait for it. The T1028 has everything I need in a netbook/notebook/laptop and so I’ll be handing over my money to Mobilx.