Engadget has a quick hands-on video with a Vega prototype 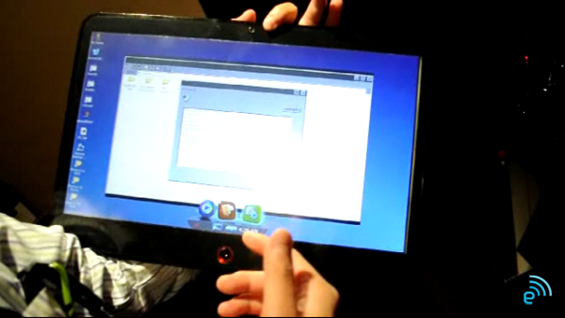 We mentioned the supposedly Android and Nvidia Tegra powered ‘Vega’ tablet a few weeks ago, and now it looks like Engadget has gotten their hands on a prototype. Jump over to their story to see the video.

The thing that will probably jump out to any of us is that the prototype is running Windows CE at the moment. It’s possible that this is just temporary while they build and fine tune the Android software that will be purportedly powering the device at launch, but I’m just hoping that they don’t rush the unit out the door with Windows CE and promise Android firmware at a later time. This would put them in some regards on the same unwanted level of the no-name MIDs I wrote about the other day (see the ‘Users as beta testers’ section). I’ve also got to mention that I’m not digging the resistive touchscreen.

At least the Tegra hardware ensures some pretty good performance. A movie playing at 1280×720 is demoed in the video and the device seems to handle it just fine. The ZuneHD might have the same Nvidia Tegra hardware, but it is too small to actually have a screen with an HD resolution, so on the Vega it is nice to see that HD decoding capability put to good use.