There has been a rush of news around the xpPhone recently culminating in a rush of posts by top blogs and, over the last 24 hours, an article from the IDG news service that hit PCWorld and others top-tier reporting sites.

The xpPhone news has been around for a while and at Computex, we even got some hands on with a prototype. JKK has a video and I’ve got some photos of the prototype.

Since Computex we’ve had two updates from In Technology Group. One, a general marketing info-set and the other including the ‘leaked’ (bloggers like to use that word!) photos of the user interface and an update include a link to the latest information on the website.

It’s not the first XP/Phone device we’ve seen so why the blogging excitement? It all appears to stem from one line in the product literature, ‘AMD Super Mobile CPU.’ 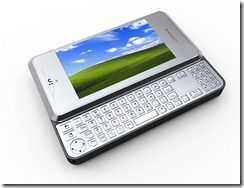 Just a quick heads up to you all that this isn’t anything new from AMD. It’s the, rather old, but ahead-of-its-time (why did you kill it AMD?) Geode LX CPU that was found in early UMPCs and netbooks. The Raon Digital Everun was an example and funnily enough, that had a phone function too. [Post and Video here]

There are still people out there that swear by the Geode so don’t discount it yet.

In Technology Group appear to have done quite some work on integrating the phone into the Windows XP ‘pc’ side of things so from a technical angle, I’m quite interested in testing one out but I can’t see this being used by too many consumers.

Some Promotional materials and UI images are shown below. 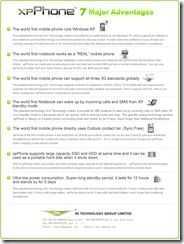 All product and UI photos in the Gallery.