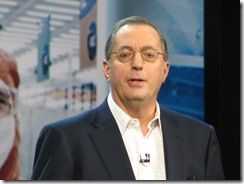 Apart from the usual TV display highlights from Intel (including an amazing 3D demo) Paul Otellini covered computing in the home, entertainment, security and energy efficiency but in the area of ultra mobile computing, Paul had a few surprises for us at the Intel keynote at CS this week.

Highlighting the quick progress (and priority!) of the Intel Application Developer Program, Paul announced ‘App Up’ (Press release) which is Intels version of the storefront for application purchases and downloads across Moblin (handhelds to Windows. What this means is that the complete architecture for the app store, including the financial services, is complete. Developers can now earn money and end users can now buy apps!

I spoke with Peter Biddle, Director of  the Intel Application Developer Program about a number of aspects of the program and it’s clear that this isn’t just a skin-deep effort. They’re thinking about everything from affiliate programs to tailored stores. Naturally I’ve installed the store on my netbook here and i’ll be giving it a test over the coming weeks. It will be insteresting to see the rate at which applications start flowing into the system! Note that Dell, Asus, Samsung and Acer are building storefronts which I can only assume will be pre-installed on netbooks soon. The end-user base is likely to grow very quickly. 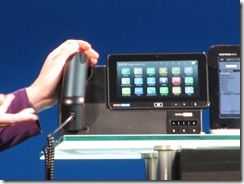 On the hardware side we got to see a couple of interesting products. The big news (which we found out about a few hours before the event) was the demonstration of the LG GW990 smarthone on the Intel Moorestown platform. Intel and LG announced that they were working on this early last year but to see a working demo and hear about a Q3 release is confidence-inspiring. We’ got a hands-on demo after the keynote and you can find details of that, including the specs, here.

Also mentioned was continuing partnerships with LG and Nokia in this area. Whether that means Nokia is going to build a moorestown-based phone is up for question but it certainly sounded like it.

Finally we saw that Intel are not ignoring the potential for Moorestown and Moblin to make a very good ‘smart’ device platform and the demonstration of ‘Open Peak’, a dockable tablet, was proof that Moorestown means a lot for consumers.