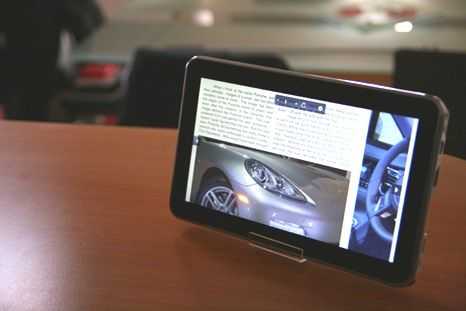 EviGroup have released some more information on their upcoming Paddle which is an evolution of the 10 inch Atom-based ‘Pad’ Tablet PC. New images show slightly improved design although we already know that the main improvements are internal with an SSD option and improved battery life. Software has also been improved with ‘Scale’ offering a way to navigate locally stored content. All hardware has now been finalised which full specs and availability coming soon. Base system looks to be Windows 7 Home Premium and pricing has already been announced. It starts at 699 â‚¬

Weight is likely to be around 950 grams which puts it at a disadvantage to the HP Slate we saw yesterday and with the pricing of that one rumored to be at $549 (expected 550 Euro after taxes) EviGroup have a challenge on their hands with the Paddle at 699 Euro.