This article is updated from Jan 2010. See below for history.

The ecosystem around ARM, its designs and licensee products can be difficult to understand so I’ve been researching the current status and have summarized the important products, brands and technologies in the article below. You’ll find details on all the important keywords and technologies, links to all the important CPUs and platforms, a reading list and some ‘tip’s’ for CES2010 which starts this week. All the information is based on my own knowledge and research so if you spot any errors, please be sure to let us all know in the comments. I know there are some CPU designers and ARM partners reading this site so again, if there’s anything that needs changing or adding, please help us all by adding a comment below.

For the purposes of this article I’m ignoring anything other than ARM v7 architecture CPUs. In my opinion and experience the previous (ARMv6, ARMv5) designs don’t provide the processing power needed for the quality web experience expected in  MIDs. Note: Tegra (current version 2009) is an ARM11 multi-core CPU  implementation based on ARMv6 architecture. I expect Nvidia to move to ARMv7 in their next Tegra product.

ARM v7 is a CPU architecture, not a CPU.

ARM V7 is a processor architecture. It’s a design that belongs to ARM and it can be used to build CPUs that can process around 2 Dhrystone MIPS/Mhz. (Wikipedia â€“ Dhrystone) That’s about 2000 DMIPs/Ghz which is not far from the processing power achieved by simple, non-hyperthreading Intel Atom cores also used in MIDs. DMIPs processor performance is not the only measurement of device speed but it’s a good starting point and is relevant to web rendering and web applications.

In general, the architecture is being used to make CPUs and platforms running at between 600-1000Mhz (about 1200-2000 DMIPs) although there is one known implementation that has been tested at over 2Ghz. Power consumption per core is said to be around 300mw per 2000DMIPs using the latest manufacturing processes although this figure can vary greatly depending on implementation.

Remember that the CPU core takes only a small percentage of the power drain in a working device where the total in-use power budget including screen lighting, radios, audio, gpu, storage and DC components can span from 2W to 10W. (Texas instruments thinks that a 1W MID is possible though)

In comparison with the Intel Atom CPU the ARM v7 architecture can be used to make CPUs that consume about 1/3 â€“ 1/5th of the power of an Intel Atom CPU for the same DMIPs computing power.

ARMv7 can also be used to make multi-core CPUs where up to 4 cores can be used to provide over 8000 DMIPS of computing power. (Assuming the software is built to handle multi-processing hardware)

(Further note: All these figures based on research, marketing figures, experience, testing and technical documents that I have read during this research.)

ARM does not manufacture CPUs.

The architecture created by ARM is used to do two things:

ARM have a number of processors that they’ve built using ARMv7 architecture and all fall under the ‘Cortex’ brand. There are real-time and highly embedded versions but the ‘A’ versions are the ones that interesting for general mobile computing tasks. ARM have three versions of the CPU. The A8 (currently in products), A9 (high end, multi-core capable due in products in 2010) and A5 (small, low-cost, due in products in late 2010) versions

When final products are completed by licensees you will often see them marketed under different brands. This is where it gets very confusing so I’ve listed most of the main players below along with notes and links to their various products and brands. Note that some ARM licensees are not made public and therefore no information is available.

ARM has 9 licencees. 8 are public.

ARM has 9 licencees. 6 are public.

No known implementations at present.

Key platform announcements to watch out for at CES 2010. Expect demonstrator products planned for 2H 2010. (All Cortex A9)

Expected in MIDs and smartbooks shipping in 1H 2010 on the following platforms. (Single core ARmv7 and Cortex A8 implementations.)

I had a chat with ARM at CES and they followed up by sending me a PDF. Here’s one slide from that PDF that is directly relevant here. It lists ‘candidate’ platforms for Mobile Computing. We listed all of these platforms above but it’s good to know what ARM sees at potential platforms. 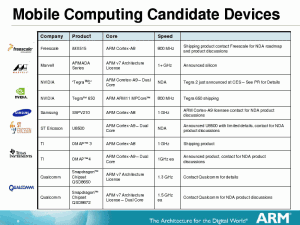 Note to PR agencies for ARM ecosystem partners. Put one twitter/web address in the comments and we’ll add it to the further reading list.

If you find the information useful for your work, please consider a small donation to help us continue the work. UMPCPortal is independent and funded purely through donations and advertising revenue.  Many thanks

Updated: 12 May 2010 with more product information