I feel I could already write an extended 10-page review on this potential game-changer after the marathon open-review session we broadcast on Tuesday but time is at a premium this week so let me just give you a basic but detailed review of the Compaq Airlife 100. 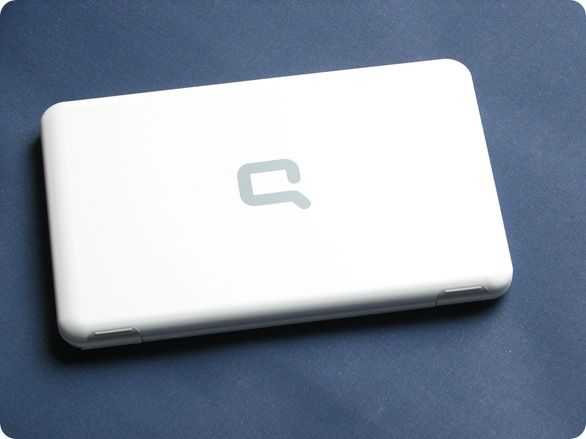 [Article text written on the Airlife 100 using the WordPress application (installed via ‘apk’ file.) Post-processing done on a netbook. The device we have here appears to be a final build with final packaging but there’s a possibility that firmware will change before launch so bear that in mind as we go through things here. Thanks to HP Spain for sending this over.]

I want to start by highlighting that I’m very positive about the potential for ‘smart’ laptop-style devices. Always-on, always-connected, location-enabled, app-store capable, dynamic and mobile-focused features are missing from most of today’s netbooks so any device that comes in and demonstrates these features is good in my book. These ‘smart’ devices show new angles on the old theme of desktop-laptops and highlight the separation of mobile and desktop Internet experiences. Unfortunately, these smart devices, have downsides. The mobile operating systems are built with short-term use in mind and although they offer new and interesting features that you don’t get on your desktop, they don’t offer the full internet experience that we all expect. If you use the Airlife 100 as a traditional laptop, as one might expect from something that looks like a traditional laptop, you will run into issues. Not only is there a learning curve and a new set of usage methods but you’ll trip yourself up looking for features that you take for granted on a standard netbook. The USB ports are missing for example. This is a slave device designed to be connected, in much the same way as an iPad, to a PC. This isn’t a device that you can simply plug a printer, webcam or smartphone into. User confusion, frustration and disappointment is going to feature heavily in early feedback. 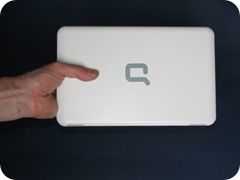 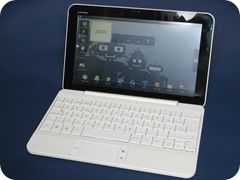 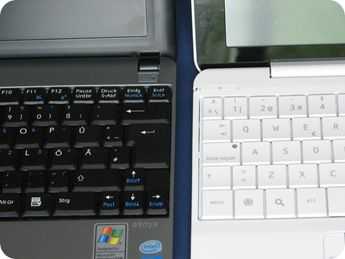 The design of the Airlife 100 is nice. Good clean lines, a light, 1KG, weight, large and quiet keyboard, good plastics and silent operation leave a good impression. There’s only one design fault of significance and that’s the screen angle. It simply doesn’t open up far enough and you end up with the screen pointing at your chest. This wouldn’t be a problem if the screen had a wide viewing angle but it doesn’t so you’re left with the constant desire to adjust the screen. I’m finding it frustrating. The screen frame houses a 10″ resistive touchscreen of 1024×600 which doesn’t provide iPad-levels of dynamics but does the job well. Coming from a touch-enable netbook myself, I found it useful and quick to use. The touchpad provides a mouse-pointer and integrated select button though so you have an option if you’re not used to touchscreens on netbooks. 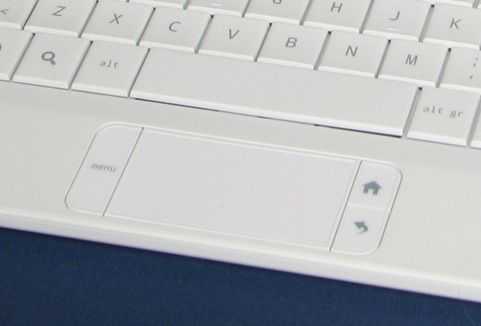 The Compaq Airlife 100 uses Android 1.6 with some HP enhancements but doesn’t provide the Google experience. This is the Achilles heel of the device and we’ve seen it on so many non-smartphone products now that we’re beginning to wonder what game Google is playing. They’re protecting their valuable smartphone marketplace from splintering into multiple screen sizes and yet failing to offer OEMs and developers the chance to expand into new form factors. The Airlife is crying out for a set of productivity applications. Even a twitter client that takes advantage of the huge screen real-estate would be nice but unfortunately, it’s not going to happen on the Airlife. Not only is the Market missing but all the important, ney, expected Google applications are missing. No Gmail app, no contacts sync, no buzz, no maps, no Goggles, no Sky map. As a Google user and Android phone user I find this extremely disappointing. 3rd party marketplaces like the Andapp store and SlideMe just don’t fill the gap so you’re left with a very sparse application suite. In HP’s defense, they too have created an app store framework that carriers can use to funnel applications to users but if it works anything like the Appslib framework on the Archos products, it is going to be very underwhelming. We can see how carriers could potentially do a deal with Google to cherry-pick applications and place them in this channel but based on Google’s history with Market, we don’t see it happening. Hunting down APK’s is possible, and the reason I’m able to write this article on the Airlife is because I found a raw install package of the WordPress application. That sort of work-around doesn’t fit with where I see the Airlife being targeted.

Let’s talk about this always-on component for a minute. It’s groundbreaking, lock-in and a feature that netbooks need to work towards. For mobility-minded users like me, it also enables scenarios that aren’t possible on a standard netbook. In the live review session, JKK (JKKMobile.com) argued well that the phone is the notifier and that always-on is not a critical requirement but in my opinion, not only is it nice to have a device that takes the load off a smartphone for high-load events like podcatching and file syncronisation but it’s also nice to have a device that provides a secondary notification system for events, especially when in the home zone where your mobile phone may not be by your side. Its also nice to think about push applications too. Tracking is one example. Finally, never having to turn a laptop off and having it ready and connected to the internet the instant you open it is something I’m going to miss when I go back to my desktop-style netbook after my time with the Airlife 100. 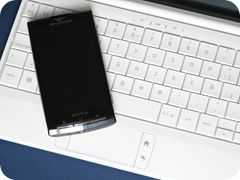 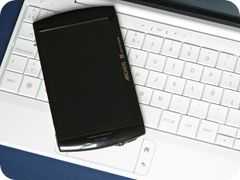 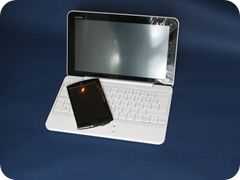 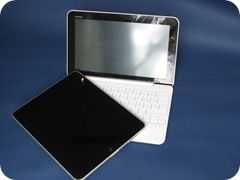 Not only is the always-on feature good but the battery life overall is excellent too. In regular measurements in the live session, we saw a consistent 12-hours when we extrapolated the drain rates. The device has a 28Wh battery which means this device is running in under 2.5W of power requirement when in-use. That is, quite frankly, stunning. Latest generation netbooks are taking three times that amount of energy. In a 24hr test (on, connected to 3G and Wi-Fi, unused, screen off) the device used just 4% of its battery. Not only is the processing platform very efficient, the Wi-Fi and 3G modules seem to be very efficient too.

Finally, in this ‘brief’ review, I want to mention the browser. As we’ve seen on the iPad, ARM-based devices can be fast and the Airlife is another example of class-leading speed although with default settings, you’ll be getting the full versions of most websites and noticing that it isn’t as fast as an Intel-based netbook. Flash is missing along with important AJAX features used in online applications. Hover, too. Accessing the back-end to WordPress has its its issues and most Google applications aren’t working. Not even the full version of Google Mail. Without applications to fall-back on, there’s a huge gap in the full internet experience with this device. This is a very serious issue. People expect the full internet experience in a $250 device. Why not in this? 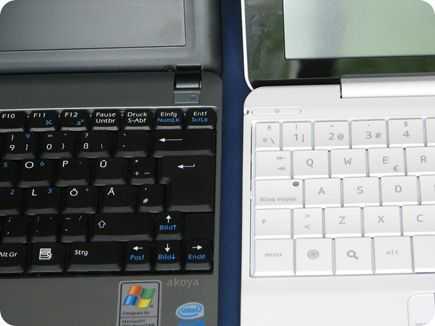 More notes on productivity issues can be found here. The article is focused at the iPad but many of the considerations apply. The Airlife is clearly not targeted at productive or business use but for those thinking about (like me, like many have done with the iPad) this article is worth reading. 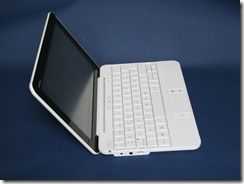 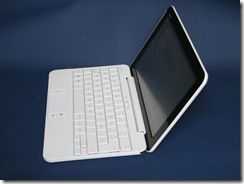 The Airlife 100 does the ‘smart’ thing better than any other ‘smart’ laptop we’ve seen before. The balance of amazing battery life, weight, communications features, always-on and performance matches casual and social scenarios well and netbooks will need to take-on some of these features to compete when the software issues on Android are solved. The lack of USB host support will be an issue for some but as smart books develop with more features and customers get more used to the application and cloud-driven usage model, the need for USB may fade away. On the subject of performance, don’t expect netbook-style browsing speeds and multitasking. What the Airlife offers is just enough for a pleasing two-at-a-time experience but there’s very little overhead.

We don’t know all the details about the pricing but with a 24 month contract, the total cost of ownership reaches up over â‚¬1000. That includes data of course and compares well with the iPad 3G that would cost more over the same period but without the applications store, you haven’t got the hope that amazing applications will develop over the next year. We suspect an outright purchase of the Airlife 100 would be about â‚¬400 to â‚¬500 which says two things. 1) That the $99 smart book is as hard to deliver as a $99 netbook and 2) That customers probably won’t be picking these up in the hypermarket for the next family holiday.

The biggest take-away from the Airlife is that it’s a smart book that ARM and their partners promised to bring us over a year ago and it’s still not ready for prime-time. The Airlife does have a customer but it’s still only a very specific type of customer. Adventurous, flexible, traveling types need to take a closer look. Unfortunately, there’s not enough ‘wow’ in the device to generate sales from marketing to other types of customer so sales will probably be limited to those that we see in the niche tabletPC and ultra mobile PC markets. Having said that, HP are doing the right thing by testing the Airlife out in a relatively small country-specific market in Europe. They will learn a lot and will be able to gauge potential for a larger project in 2011. The rest of the world needs to take a close look at the potential too because there are only a few software elements that need to be fixed before it becomes quite the competitor.

Fantastic, always-on, always-connected and long battery life operation are desirable features but the gaps in the internet experience and lack of marketplace mean it’s only possible to use this device for casual purposes although video support needs to be fixed before that scenario is truly covered. [this may be happening in final builds we don’t have that information yet] Although the Airlife is an important step forward for ‘smart’ books and it proves that the hardware platform itself is fit-for-purpose, it also proves that work is needed on the software. Android may work well on leading-edge smartphones with slick overlay software and a ton of supporting applications but it appears extremely immature in large-screen, laptop-style scenarios. It’s possible that we’ll see the software evolve quickly but as a product, the Airlife 100 won’t hit the mark to become a huge seller, especially considering the price.