There are a lot of Intel-related rumors and unqualified information that fly about and one of my jobs is to mash all that up and try and work out what’s happening so that I can ‘skate to where the puck is going to be’ as Steve Jobs would say. It allows me to do a lot of predicting. Device battery life, OS strategy, performance estimations and more.

A version of Moorestown that supports Windows will be announced in 2010 and it will allow UMPCs running desktop operating systems to shrink another 20% while gaining another 20% battery life but products using this may not appear in 2010. They could also be focused at the embedded market which puts a question-mark over price and small production runs for UMPCs. [Predictions for 2010]

There are three lose ends relating to Intel’s ultra-low-power platforms and it’s time to tie these up and make a prediction before I head to Computex (Where all will be revealed anyway. Why do I bother?)

3 â€“ Rumors of ‘Moorestown-W’ that will allow standard builds of Windows and Linux distributions to run on the latest Intel ultra low-power platform.

I have two trains of thought right now. Either Intel will announce a new netbook platform or a new Menlow-like Win7-optimised platform for ultra mobiles.

Intel have to improve the video capabilities of their netbook platform. There’s no video playback acceleration at all and with flash 10.1 enabling smooth YouTube video on devices that do have video decoding, the netbooks are going to start to look dated. Battery life needs to be improved too. Smartbooks will, again, make netbooks look old and dated. Always-on battery life is also a consideration. If Intel want to unify the architecture from smartphone through embedded, TV and netbook platforms they’ll also need to drop the GMA3100 GPU and put something like an enhanced GMA500 in. GMA600 lives in the Moorestown platform, how about GMA700 with 800Mhz clock and VP8 decoding on board for 2011?

But is it too early for a new netbook platform? I think so. Cedar Trail is likely to be a more realistic thought. Late 2011. 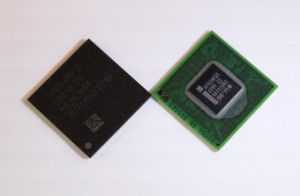 Menlow has been with us in products since mid-2008. It got a refresh last year but during its lifetime we’ve gone from mainstream XP to mainstream Windows 7 and it’s time for an update in order to keep up. As with Lincroft (the CPU on the Moorestown platform) and Tunnel Creek (the CPU on the Queensbay platform) optimisations in size and performance can be made by bringing the GPU and memory controller on-board with the CPU and into a 45nm process. Interestingly, Queensbay/Tunnel Creek does this and has been already been labeled as the follow-on to the embedded (extended lifecycle) Menlow products so if we think about the similarities between that and Moorestown, it’s difficult to imagine the platform being anything other than a variation on this. What was rumored as the Oaktrail platform should look very similar to Queensbay and should be just enough for a smooth Windows 7 multi-touch performance in a handheld form-factor. In effect, another ultra mobile PC platform.

Here’s what I estimate the platform will look like: Highlights, highlighted.

If Intel and Microsoft have been working well together, we might even see some special Windows-7 always-on state but that’s possibly too much to hope for. I don’t expect Intel to say anything about netbooks but to me, this look like a platform that could evolve to 32nm and dual-core easily and thus would become the next netbook platform for 2011/2012. Current target markets for the product would be unchanged from Menlow. I.e. MID and UMPCs but the marketing will change and you’ll see a lot of ‘tablet’ talk. I don’t see it as a huge segment but it was something that Intel was doing anyway so it makes sense to ride on some of the hype around at the moment.

The ‘tablet silicon’ is likely to be Oaktrail/Moorestown-W, another UMPC-style platform. It could enable 10 inch, 15mm tablets weighing 600gm running Windows 7 and giving 6hr battery life. Not only would it enable tablets of 600gm but it would enable very thin and light netbooks, slider and clamshell handheld devices running Windows 7 to a point where it could be a better Windows 7 experience than on a netbook (assuming 1.9GHz max clock, double GPU power) and therefore, could evolve in to the next netbook platform at higher clock rates in a 32nm process. Note that the Intel AppUp store would run on this platform. Its sister product, Moorestown will continue to be aimed at even smaller devices with ‘always-on’ capability. I.e. ‘smart’ devices. These would only be able to run Android or Meego however. All products are likely to have CPU’s in the Z6xx series and are likely to be marketed as a family that fits inside Intel’s idea of a ‘continuum.’

Note: This is all educated guesswork. All will be revealed next week at Computex. I’m attending under the ‘Intel Insiders’ program and should get some great access to products, information and people.