For those of you that don’t know who Mike Cane is, dont’ worry too much. This post is pretty-much aimed diredtly at him.  He’s a long-time customer, commenter and participant at UMPCPortal and Carrypad and runs a continuous chain of personal blogs (currently he’s at Mike Canes iPad Test) that  focus around the ebook theme. He’s also very opinionated, sometimes rude and one of the biggest procrastinators I know. I’m sure he won’t mind me saying that because he’s also happy to hear opinions. I like having him around.

He’s been following the UMPC-MID-Tablet-Kindle-Ipad theme for a while and also knows a bit about ebook publishing, ereading and reading in general. He likes open standards but recognises that if open standards don’t enable content then there needs to be choice until a de-facto solution arrives. He likes being connected, participating in Twitter, being mobile, understands ergonomics and he wants value in his products. JKK and I often take the Mickey out of him for getting excited about devices, finding a roadblock and then never buying anything. Well, Mike, when I installed Amazon’s Kindle application on my Archos 5 this morning (with one foot on the baby rocker,) I had to think of you. 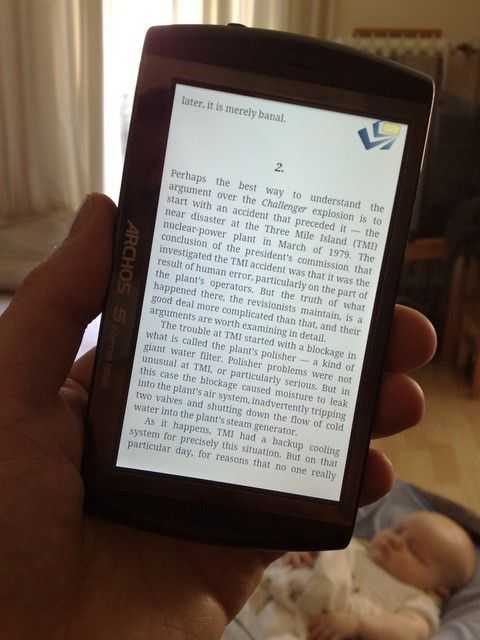 The Archos 5 [details] isn’t a new tablet and is not the most advanced tablet. When it was launched it had a continuous string of software problems which ruined the user experience for many and damaged the reputation of the device. Personally, I enjoyed the device as it had a good, fast browser, processing power, screen clarity, portability, flexibility, ability to support many many video standards and most-of-all, a great price. Over time we’ve seen improvements in the firmware and through applications like Aldiko, FBreaderJ, NewsRob, ACast, Seesmic and a number of ‘hacks’ the device has blossomed into something that makes a perfect handheld gadget and quite possibly one of the nicest and most flexible handled e-readers out there. Many people complain about the lack of a capcative touchscreen or the lack of Google Applications but at $250 (RadioShack looks like a good source in the U.S.), you can complain all you want – it’s a great value, internet connected MID, PMP, PND, Ebook reader, Web tablet and more. (See the full review.) Add another $50 for a 16GB micro-SD card, a case and a docking station with USB host and TV-Out and your’re set-up for  some real gadget fun. For the ebook reader, you’ve got Epub support, Kindle support, PDF support and through the Think-Free application, you can read Microsoft Office Docs and your Google Docs. There are more ebook store solutions too.

Mike knows about the Archos 5 but this Kindle application  might be the final straw for him. There isn’t much else in terms of hardware on the horizon Mike. Summar is here and it will be quiet for a few months. Maybe we’ll see some new Archos devices later in the summer. The Dell Streak is double the price; The iPad too. The SmartQV7 is not powerful enough. Maybe the WiTS A81 is an option but it needs a lot of testing before it can be recommended. The same goes for the top-of-the-Carrypad-charts Huawei S7.

So, Mike. Does the Kindle application take you over the edge or did you buy something already?

Anyone else having fun with their Archos 5. Would you recommend it to Mike?

Full information, specs, links, images, reviews for the Archos 5 in our product database.