We’ve spent a week in San Francisco at one of the biggest developer shows of the year and haven’t posted a single article on Carrypad yet and that’s because most of what we saw was Windows-based. That, in our eyes, isn’t exactly the ideal solution for consumer-focused solutions we would be reporting on at Carrypad. The Dell Duo was cool but it’s Windows 7 on a netbook platform with a launcher. The ExoPC was cool but once again, it was a Windows 7 netbook without the keyboard. The Ocosmos OC1 was amazing but once again, its a Windows 7 device.

Only one item stood out for me in terms of consumer-focused solutions and I haven’t reported on it yet Its an Android tablet…on Intel. 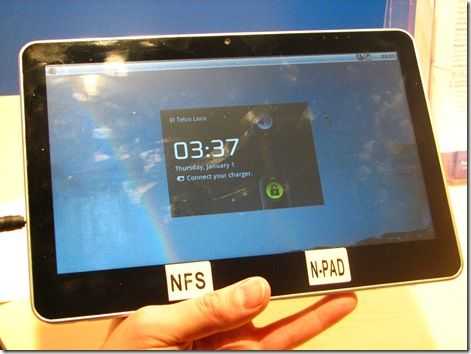 We don’t know too much about the device yet because the NFS NPad was being used as a demonstrator by another company but from what we see, Moorestown is going to enable far far better consumer-focused solutions than the N450 and N550 solutions we’ve been seeing running Windows. It was thin and very light (comparable to the Archos 101 which runs on an ARM Cortex core) and surprisingly, running Android. A quick look around the net tells us that the NPad also appeared at Computex and has also been spotted running Red Flag’s MeeGo-based Linux distribution. This is a sign of what might happen when MeeGo meets Moorestown so if you’re not worried about Windows but still want a powerful tablet, this could be worth waiting for.