Is AMD Now In the Ultra-Mobile Game with Ontario?

In our podcast on Monday, we spoke briefly about AMD’s ‘Atom killer.’ Coming from the ultra-mobile sector we were fairly negative about the potential impact of Fusion architecture. A comment on Carrypad made me think twice and take a closer look at the low-end of the Fusion processors (or APU’s â€“ Accelerated Processing Units- as AMD calls them) to see just what might be possible with Ontario.

I’ve seen a demo of Zacate, the dual-core 1.6Ghz version of the APU and yes, it was impressive. What demo isn’t? What was deeply imprinted on my mind though was the scary TDP of 18W. Even if that part is able to get things done and let an OS sleep faster than others, thus reducing average drain, designing around it is going to result in netbook sized devices. It’s nothing for mobile tablets.

Zacate is dual-core running at 1.6Ghz so seeing an opportunity for another part, AMD have cut down the clock and managed to reduced the design power to 9W with the Ontario part. (The overall platform is called Brazos.) We’re probably looking at 900Mhz to 1.2Ghz clock speed on a single-core here. Remember, this is a dual-core out-of-order CPU so not directly comparable with the 1.5Ghz Atom parts. 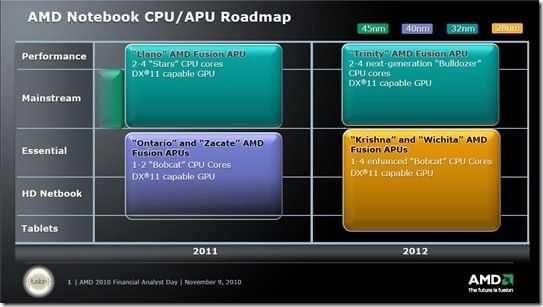 At this point though, it’s time to say ‘stop’ because once again, we’re talking about a netbook platform. Sure, we’ll see it in a tablet or two (it’s highly likely to be in the Acer slate) but don’t expect them to be much less than 1KG and average less than 8 to 10W drain. With the standard 30Wh battery inside this isn’t going to break new ground in terms of battery life and with battery life the #1 consideration for ultra-mobile computing, what’s the point of talking about HD decoding and GPU-accelerated HTML5?

AMD’s Zacate and Ontario will help bring competition to the netbook sector for sure and that’s a good thing. It will highlight how badly the Atom Netbook platform needs HD video decoding and a boost in 3D performance (although that is likely to be fixed in the Cedar Trail product in 2011) but it isn’t something for the ultra-mobile market. Looking at the roadmap, it looks like the 28nm ‘Wichita’ might be competition for Oaktrail with Windows but don’t expect huge leaps forward.

What the X86-based ultra mobile market needs is a change of platform AND operating system to permit always-on, ultra-low-power sleep states, high integration of Wi-Fi and 3G on new platforms. This is why ARM/Android devices are idling, connected, at 0.5W and a netbook is taking 10x that amount! It’s also why MeeGo and Oaktrail/Moorestown are being developed. Migrating away from Windows desktop support is probably the best long-term strategy there is.

Some information in this hothardware article was used in this report.