Day 2 of the MeeGo included close to 60 sessions for the 1000 people at Aviva stadium in Dublin this week so there was no shortage of information available. As someone who’s trying to work out ‘when’ and trying to analyse ‘where’ MeeGo really fits among the mobile and desktop operating systems though it was hard to get any solid statements out of the presentations. It’s up to me, you and everyone else in the industry to take in as much information as possible and to try and work it out ourselves. What is clear though is that something happened to MeeGo this week. 1000 people turned up from all over the world to look at a software ecosystem that isn’t ready for products yet. One must assume that MeeGo is flicking all the right switches!

Here’s some detail from sessions I attended on Day 2. 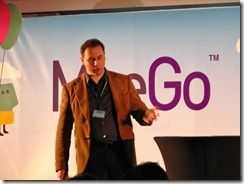 MeeGo Application Developer Ecosystem â€“ Ronan Mac Laverty (Nokia) talked about how an good ecosystem creates a feedback loop that allows a product to be improved. He also highlighted that the ecosystem is easy to get in to. Highlighting the QT SDK he said â€œPeople that have never programmed in their life can use this. inch MeeGo is just starting though and in comparison with iOS and Android it’s still at the starting gate highlighting the relatively low number of developers and a problem with documentation. He came across confident though and hit us with an interesting thought: MeeGo is possibly the best-funded open-source project there is. No-one can really confirm that but over the last few days we’ve certainly been able to see the investment by the partners. 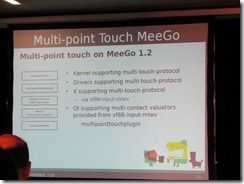 As critical as the applications  is the touch experience. Nokia stated on day one that we’re entering a new generation of computing because of touch so if MeeGo doesn’t get this right in the core then they will have major problems fighting against the ‘magic’ that is touch in iOS. MeeGo 1.2 will be the milestone for touch and clearly, when you hand out 600+ capcative multitouch laptops for attendees, you’re sending a strong message to the developers. The core looks good and when I asked about latency, Intel were confident that there will be no problem there but it’s up to developers to handle it well by using gesture prediction and quick feedback into on-screen action. It wouldn’t hurt for MeeGo to drum-out this message even louder. All the demonstrations were being done on a Lenovo S10 3T so if you’re interested in MeeGo, you need to be interested in multitouch. I’m testing the Tega V2 with MeeGo too so I’ll let you know how that goes. 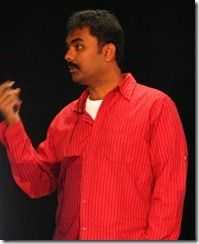 Another point that needs to be driven home to devs, especially the majority here who seem to be focused on the N900, is screen size. With target devices at 4 to 65 inch there are things to think about. I was pleased to see a focus on power management here. This presentation needs to become a checklist for devs but I’ve pulled out some points and added my own below.

I’m sure there’s more that can be added here. 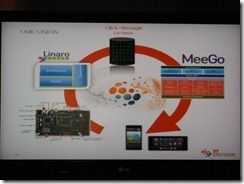 I’m hearing that products based on the interesting ST Ericsson U8500 (Dual-core Cortex A9 platform targeted at mobility More on ARM-licensed products here.) are coming to market in Q1 2011 and I think it could be one to watch out for but did you know that they have taken work from the Linaro project (ARM partners create core, Linux-based software for ARM products) and married it with MeeGo? They’ve added some closed-source binaries and say that their software will be available early next year. You have to wonder what Intel think about this! 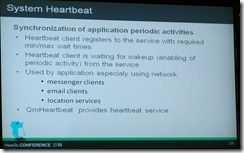 The presentation got a little too deep for me to be honest but it was interesting to hear the presenter promote ‘System Heartbeat.’ Heartbeat is a way to syncronise and schedule applications use of devices such as Wifi and GPS and it will be critical in creating devices that are class-leading in terms of battery life. As far as I can see, applications don’t have to use it but it’s possible that a manufacturer could use this to create a dedicated device with a dedicated set of applications that use this feature. I’d like to see a way to tell if applications are built with this feature. How about a ‘power efficient’ flag in the application store? 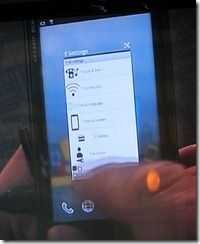 Progress is being made but in my opinion, what we’re seeing on the handset UX demonstrations doesn’t do MeeGo any favors. Single homescreen, static icons, no widgets. Is this going to stimulate customers (OEMs) or just give journalists and competitors something to highlight? In the same way that Android Open Source is used to create some truly terrible products, this work could end up being used for the same. I’ve written more about this and included a demonstration video in an article yesterday. Final thought on this â€“ MeeGo should but effort into getting the interesting roadmap visualized through CGI.

What I saw was just a cross-section of the sessions at MeeGo conference. There’s everything from high-level marketing to deep-level design going on here but for no, that’s it for me for the time being. I’ll be continuing to follow MeeGo and will get an general MeeGo status write up out soon.