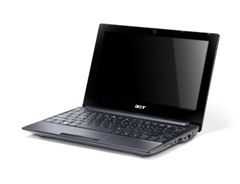 The average weight of a 6-cell netbook is somewhere around 1200-1300 grams with true battery life of about 6hrs so seeing the specs for the Acer Aspire One 522 (AO522-BZ897) is quite encouraging considering the increase in CPU and GPU processing power that this will offer.

6hrs sounds good but let me send a quick warning out because the power envelope of this device is likely to reach much higher than any netbook. I predict that you could run this baby dry in under 3hrs if you pushed it hard, especially as the 6-cell battery looks to be a relatively low-capacity one. (4400mah)

Still, when you think about the upgrade thoughts of tens of million of existing netbook users that have 3hrs battery life on their 1-2 year old netbooks, this is quite an attractive upgrade in the 10 inch segment. It’s certainly one that I’m looking at very closely indeed, especially at the $329 price shown on Amazon.com now.

AMD look to be filling the big gap left between Atom and the new Core processors quite well. Let’s see what Intel come up with the for the next generation of their netbook platform (Cedar Trail) which really needs to hit similar performance to the AMD Fusion platform (Ontario AMD C-50 APU) in a smaller power envelope to be competitive. With HD video, HTML5 and Windows 7, the requirements for CPU,GPU and memory have changed a lot since 2008.