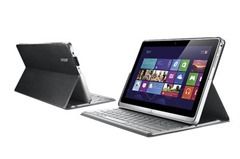 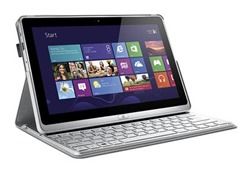 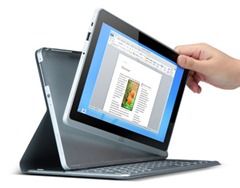 The Acer Aspire P3 Ultrabook, that’s actually a tablet with a keyboard accessory, is available for pre-order. We picked up on some of the specs of this low-cost tablet but here’s the full specification run-down. It looks like it will be the first Ultrabook to use the new Y-Series down-clocked lower-TDP processors.

Before we go into the specs of the Aspire P3, let’s highlight that Intel Core Y-Series range again. It’s not a new processor at all. It’s based on Ivy Bridge and is clock-limited in order to offer designers an easy (and probably lower-cost) option for tight thermal designs. In terms of CPU performance we’re coming in at a level lower than the first ever Core i5 and Core 7 Ultrabooks so please be aware of this. We look forward to testing it.

The Acer Aspire P3 is, at it’s current pricing, expensive for what you get but we suspect there’s quite a bit of margin built in here so pricing could drop quickly.

The problem we have here is that AMD and Acer are likely to launch a tablet on Temash soon which, as far as we can work out, is likely to be in exactly the same performance bracket. Price, however, is likely to be less for the AMD tablet.

Note that the Lenovo Yoga 11s and