Although Intel are updating the current Baytrail D/M range, we’re looking forward to a 14m version and an all-round update for Windows tablets and mobile PCs. That update was previously thought to be CherryTrail but it turns out that Braswell is in the mix too.

At IDF in Shenzen Intel announced Braswell for ‘Entry Systems.’ Given that the presentation was given by Intel’s PC Client Group this means that it’s likely be the replacement for Baytrail-M and D that we see in low-cost PCs and tablets today. E.g. the Medion Akoya P2212T

Braswell is a 14nm product presumably using the Airmont Core although this wasn’t confirmed in the IDF presentation. Coverage of Braswell in the press release was very brief…

In a brief preview of Intel’s future roadmap for PCs and mobile devices, Skaugen said the effort to bring innovation to the value space will continue in earnest with the next-generation 14nm SoC, code-named Braswell.

In his presentation, Kirk Skaugen had this to say.

“Today I want to announce the codename of the next generation Atom microarchitecture-based PC called Braswell. It will be a leading 14nm nanometer technology delivering an even lower bill of materials cost and higher performance.” We assume Kirk meant SoC and not PC in that announcement. 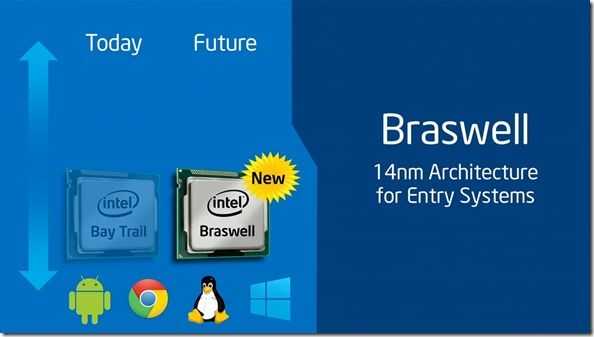 Braswell may also be targeted for Chromebooks

Braswell’s size, highly-integrated design and efficiency will allow manufacturers to produce lower cost devices by reducing design time, bill of materials and the size of the battery needed.

CherryTrail-T remains the ‘high-end’ of the next generation Windows CPUs and we’re likely to see this on tablets at the start of 2015 with a few products possibly making it to market for the December holiday period.