I started testing the Intel NUC with Bay Trail-M yesterday and in the post you’ll see some performance figures for Android 4.4. Today I’m looking at Windows 8.1 (Pro) which was a simple, if lengthy, install process. Windows installed correctly from a DVD but a lot of time was taken installing all the (64-bit) drivers. Today I’ve had a chance to go through my usual suite of tests and you see the results below along with some comparison figures. 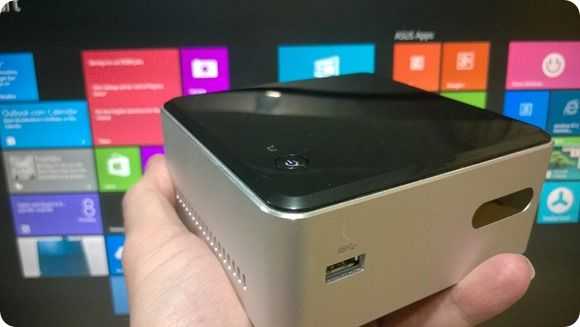 It’s important to note that I’ve gone for a fast SSD drive in the system. The MyDigitalSSD BP4  I have is a 240GB version but you can pick up the BP4 in a 64GB version for around $60 and it’s something I would recommend because this dual-core Atom CPU isn’t hugely powerful. We’re talking about the CPU and GPU power of an 8-inch Windows tablet here so in order to use this as a desktop PC you really can’t cut corners on storage speed. Oh, and why wouldn’t you just use an 8-inch tablet with a free copy of Microsoft Office? It’s a good question but a SATA disk interface and USB3.0 are just two arguments against that but given that a Windows 8 license is around $100 on top of the, approximately $240 you’ve already spent on the NUC, RAM and disk, if you’re also in the market for a student solution with MS Office you can afford to look at a 64GB Lenovo Thinkpad 8.

Buying a tablet isn’t as much fun as building your own NUC though and I suspect that most NUCs won’t end up running Windows. XBMCbuntu or some other free Linux distribution is more likely, especially when you consider the built-in IR receiver. Advertising displays, education, POS and automotive industries (and hobbyist) are also likely to be interested. Having said that, I’m enjoying this Windows 8.1 solution so far. The SATA SSD is making it feel much faster in operation than a Windows 8 tablet and it’s quieter than any laptop once the unit is mounted behind a monitor. The Gigabit Ethernet port is helping to boost internet speeds too. 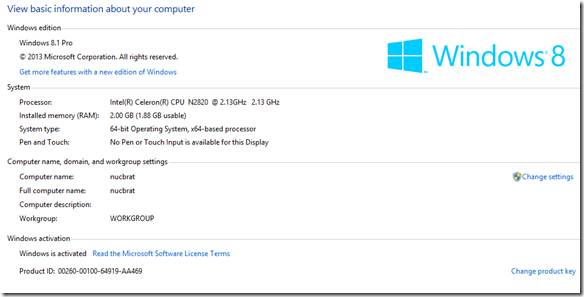 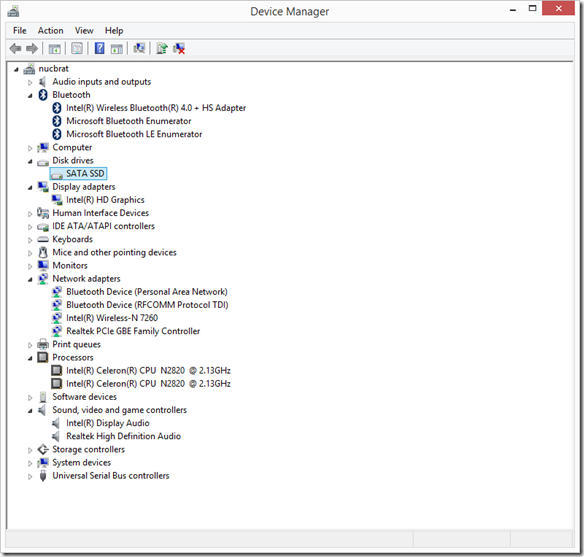 In terms of raw power I am a little disappointed. I should know better but the promise of a 2.4Ghz dual-core CPU had me thinking in terms of Ultrabooks and not tablets. It’s good, but don’t get over excited about anything like PC gaming or video editing. On that topic, note that there is no Intel Quick-Sync hardware video encoding so rendering videos could take a long time unless, you have a very very recent (we haven’t seen any in circulation yet) version with the N2830 processor inside. That version does support Intel Quick Sync and should improve basic video encoding performance by about 10X.

As mentioned, general performance is OK. It reminds me of the performance I got from the Acer V5 laptop with A6-1450 CPU after I had done an SSD upgrade. That platform, however, has better GPU performance. The PCMark7 score was good at 2732 points which safely beats al the Bay Trail-T tablets and even the Lenovo 11S with an Ivy Bridge Y-Series Core i3 CPU. Ultrabooks with recent CPUs and SSDs are getting around 5000 points in this test though and that’s the sort of performance you should be looking for if you’re doing serious multitasking and are looking for a ‘barrier-free’ office PC platform. 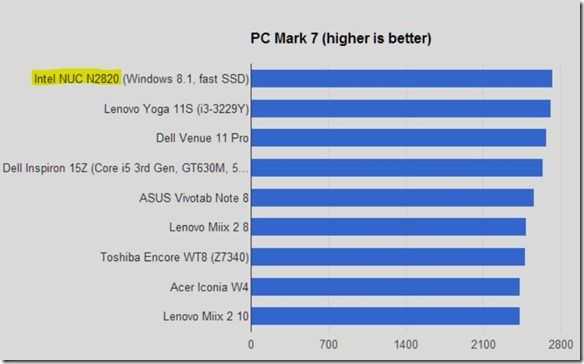 For a raw CPU test we ran Cinebench 11.5 64-bit and saw a rather poor score of 0.83 which is the slowest CPU we’ve tested this year. The Z3740-based Windows tablets are showing 50% better CPU performance. Clearly the SSD is helping to prop-up the PCMark7 scores so if it’s CPU performance you need (excel calculations, software development environments for example) then step away. A 2012/2013 Acer W510 running Clovertrail returned 0.53 points in our review so at least it’s a step up from that. 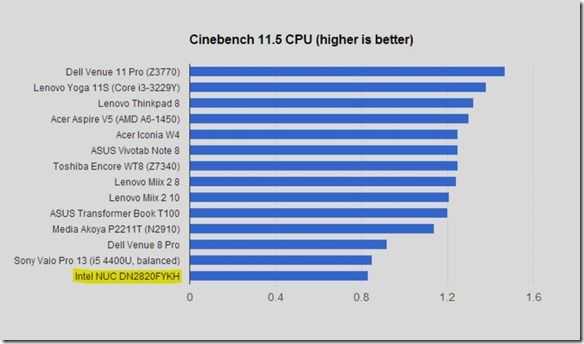 In addition to Cinebench we ran Passmark.

GPU performance is comparable to the Bay Trail-T tablets we’ve seen. The Cinebench OpenGL test returned 6.0 FPS. We also ran the cross-platform 3DMark Ice Storm Extreme and saw results slightly above that which we see on the Intel Windows 8.1 Bay Trail-T tablets. The Ice Storm result on Windows 8.1 was also 13% better than the result on the NUC when we tested it with Android 4.4 although that OS build is still an early one and might need some optimizations. Again, this isn’t a gaming platform but Windows 8 ‘modern’ games did play smoothly. Pinball FX was smooth and responsive on a Full HD screen. F18 Carrier Landing was the same; Drift Mania Street Outlaws too. 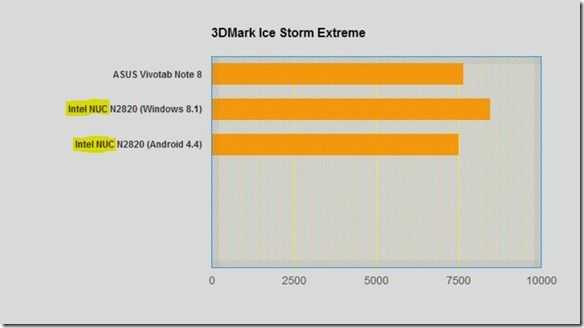 Update: Under ‘Performance’ power profile and with the latest BIOS installed we saw a score of 8604 under Windows 8.1

Browsing speeds are good on the NUC. The SSD and Gigabit Ethernet are helping but tests like Peacekeeper and Sunspider show some lead over Baytrail-T devices. A Sunspider score of 495 beats all the Baytrail-T tablets we’ve tested and a Peacekeeper score of 1374 is good too. It doesn’t come close to the value you get out of an Acer C720 Chromebook though – and that’s cheaper! 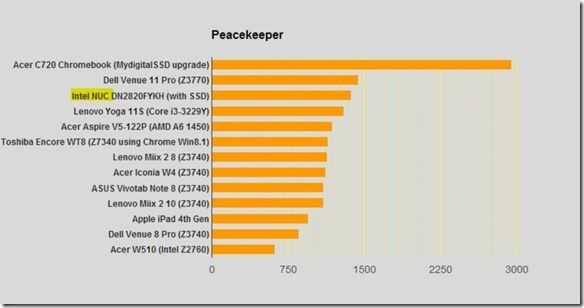 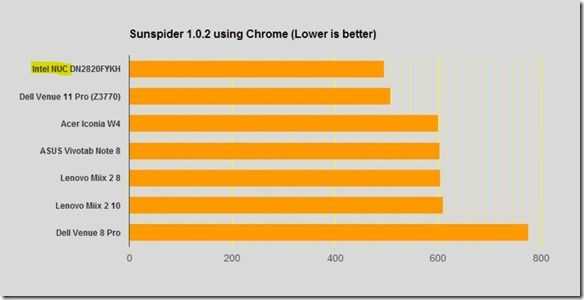 Finally we come to video performance. In a Handbrake encoding test both with and without Intel Media SDK options turned on we saw under 9 FPS in our test which is truly bad. The Bay Trail-T tablets are scoring over 100 on this test and current Ultrabooks score over 300 fps. As for decoding, we played a 50 FPS Full HD H.264 video (30Mbps) through Windows Media Player and saw no problems but a CPU utilization of over 70%. Under Windows 8 Video app, however, the utilization was down to under 20%. Clearly there’s some hardware acceleration going on under Windows 8 modern that doesn’t happen when using Windows Media Player on the Desktop. Playing a 3Mbps H.264 video from a network drive through the Windows 8 Video app resulted in about 6% CPU utilization.

YouTube performance varied between browsers with Chrome struggling to offer a 1080p video without dropping frames at 100% CPU utilization. Both Modern and desktop versions of Internet Explorer were able to provide a smooth playback experience with under 20% CPU load. We continue to recommend Internet Explorer for YouTube playback on Windows 8.1 (the Modern app comes with extra security advantages too.)

A video playback test under XMBCbuntu is probably more relevant for many people thinking about the Intel NUC. We’ll be testing that out at a later stage.

We are using a MyDigitalSSD BP4 240Gb unit to test with. Here are the Crystal DiskMark results. 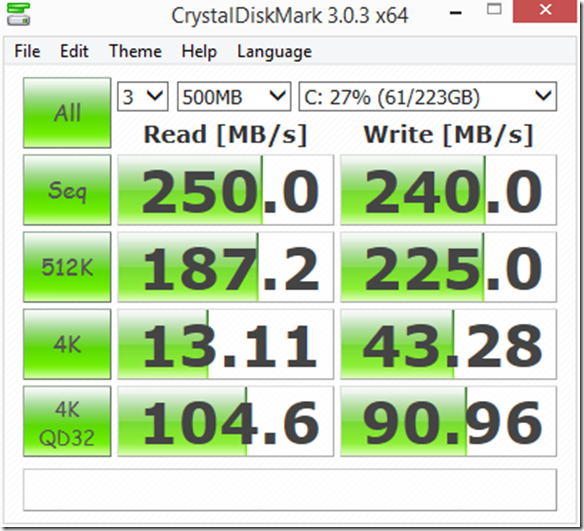 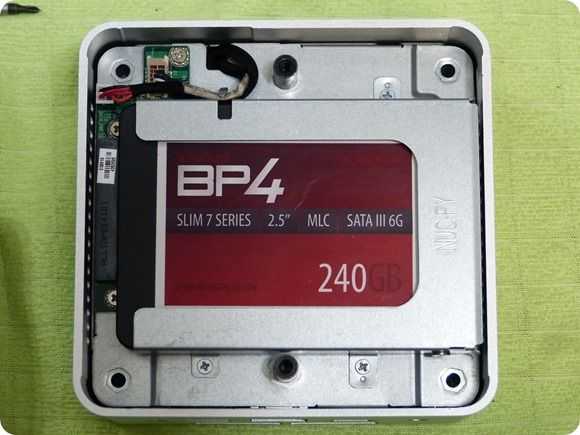 As you can see there’s not much to moan about. In a previous test with this SSD on an AMD A6-1450 system (here) we saw slightly lower scores.  We don’t recommend using this NUC as a desktop with a spinning hard-disk as it will significantly slow down the perceived performance of the system.

Idle power used on this platform is so low that it’s not possible to measure it accurately using a consumer ‘Watt’ meter. In our tests it looked like the PSU was actually using 9W of power. We’ll set up a DC-only test at some point in the future in order to allow us to more accurately measure power usage.

Noise measurement has proved almost impossible here as the levels are so low. As ambient noise on the workbench is 44 dB it’s very difficult to tell if the NUC is on when mounted behind the screen but there is definitely fan noise detectable if you listen carefully in a silent room. We are running the latest BIOS with default cooling settings and understand from owner feedback that it might be possible to reduce the fan noise through settings available in the BIOS.

We haven’t performed tests on the WiFi module or done any audio tests.

In a follow-up article we’ll be looking at XBMCbuntu.

Feel free to ask questions in the comments section below.

We’re reluctant to call this NUC an all-round capable Windows desktop PC but there are definitely some interesting use cases here. It’s small and quiet and can support fast SSDs. It works well as a video playback unit (assuming Modern or IE is used as the playback environment) and keeps up well with multi-tab browsing usage. With the built-in WiFi unit it’s very portable and could make a useful camping, holiday home or hotel solution. For those thinking of Microsoft Office use cases we would suggest to take a look at the Lenovo Thinkpad 8 which comes with a 64GB SSD, USB3.0, HDMI and Office Home and Student for the same price as a NUC with Windows 8 and the Office license. For those looking for a browsing only solution, you can’t beat the Acer C720 at $220 with this unit.

Overall we think that the Celeron N2820 NUC may appeal to those who have specific Windows 8 use cases in mind (data collection, control, advertising, education, kiosk, IoT etc) or for those that have a spare SSD, memory and Windows license lying around. For those wanting a media-center solution, stay tuned. We’ll be looking at XBMCbuntu where we really think this NUC will shine.