At last. Microsoft have just announced the name of the next version of Windows and to everyone’s shock it’s going to be called Windows 10.

I’ve been following the live blog at The Verge and hundreds of tweets coming out of the event and it’s already clear that Microsoft is going to be focusing on business with Windows 10. A familiar look, security and management is being promoted which, for those of us into touch, is a worrying start.

As was previously rumored, Store-based Universal apps will be sandboxed and will run on the desktop. At this point we’re getting a little bit more worried about the touch UI that was Metro.

Microsoft appear to have implemented a new multi-desktop feature which allows the user to grab apps from another desktop and there’s an unexpected update to the command line. You can now CTRL-C, CTRL-V among other keyboard shortcuts

“We want to support those Windows 8 users who have touch machines and getting a lot of benefit out of them.”

Some edge swipes are still there, there is scrolling and pinch support. The charms bar was shown in a demo but apparently that might change.  The task view (swipe from left) will be removed and replaced with a desktop-style task switcher.

2-in-1 users can benefit from a new feature that Microsoft are calling Continuum which changes the look based on the input method being used.

Touch users can now breath a sign of relief. Here’s the Start screen on a touch-enabled device. 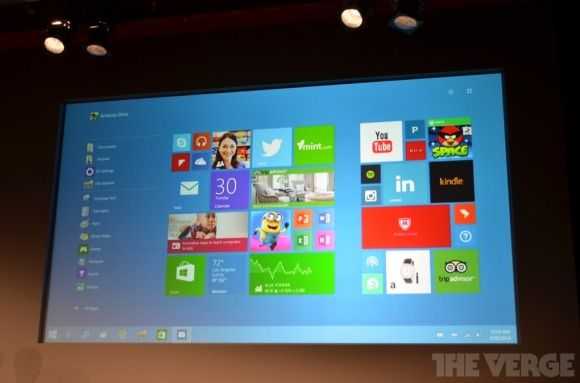 Above image via The Verge

Preview versions of Windows 10 under the Windows Insider Program  will appear at http://preview.windows.com

Windows 10 is said to be shipping “later in the year” 2015 which is later than expected. “At our Build conference in April, we’ll share more about Universal apps.” Of course we already heard about universal apps at this years BUILD.

Finally, in a Q&A it was confirmed that the new smartphone operating system from Microsoft will also be called Windows 10 but won’t have a desktop.

That wraps-up the first information we have about Windows 10. More will filter through over time so stay tuned!