First-off, lets highlight a couple of Windows issues that won’t go away soon. Updates, indexing and virus checking on a Windows PC can kill the user experience for days after the first switch-on. I’ve completed  three reboots and had to uninstall the McAfee trail software because it’s just too heavyweight for the system. I’m left with Windows Defender which is the built-in, but relatively poor-quality, anti-virus solution. If there’s one nagging feature of a Windows laptop it’s anti-virus and for anyone that wants to minimize this risk, try to move to a Chromebook. After 48 hours though the Windows system has settled down. Boot time is under 20 seconds and return from standby is as instant as on a Chromebook. It’s smooth and it’s probably got a lot to do with the SSD. It’s only a cheap one but it beats a hard drive-based Windows PC hands-down. 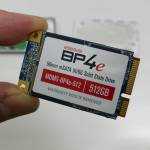 The second instantly noticeable problem with Windows is OS-creep. On first-boot I saw 8GB free from a  32GB drive. After just 24 hours it was down to 4GB and there was no easy way to see how that had happened or to clean it up. 10GB of the drive is taken up with a firmware image. It’s possible to shift this off onto a USB stick but it’s not obvious how you might do that. Windows really needs an easy clean-up option on these small-drive systems. Chromebooks are almost worry-free when it comes to storage.

Battery life is no worse on the Windows laptop. You might be surprised to hear that but because Windows 8 and the new SoCs work so well together they can reduce power usage just as well as a Chromebook can. This 36 Wh battery will give you 7 hours of browsing and up to 10 hours of H.264 video viewing. You won’t get anywhere near that on the old Windows 7 / HDD combination. The battery life argument for Chromebooks does not carry much weight and with some Windows device supporting Connected Standby, there’s an argument for Windows here

Memory usage on a Windows laptop is higher than on a Chromebook but the important thing is how the two devices start to swap memory out into temporary storage when ‘real’ memory has run out. Windows has a complex algorithm of prediction, sharing and pre-loadingand it does work well after a while but a large part of the mechanism is a file on the disk that can be used when real memory runs out. Pagefile speed relies on disk speed and disk speed is always, relative to memory speed, slow. The user experience on a Windows PC dives when main RAM is low. Chromebooks, on the other hand, use a memory compression technology that’s faster and much more graceful from a user perspective.  The fact is that not only is ChromeOS lighter on memory usage, it does a faster job of swapping using compressed data storage in RAM.

Minecraft and Skype are the two applications that cause the biggest barrier for the potential Chromebook consumer. Yes, you can get it working with some hacks but let’s not get into that because a consumer wants the simplest of experiences, not a set of hacks. Skype on Windows RT is light and always-on capable due to the Connected Standby mode on some low-cost Windows devices. That’s a big advantage, especially when you think about mobility and 3G connectivity. There are also hundreds, maybe thousands of examples of desktop applications that are ‘must-haves’ for current Windows users. Getting those users to change is a tough, tough job and will work in netbook’s favor.

Networking and network storage on a Windows PC is more flexible. It’s not simple sometimes but if you’ve got a NAS with 1TB of photos and videos on it a Windows PC will be able to access it where the Chromebook can’t. Setting up a Windows PC as a router or hotspot is also possible without too much trouble. Sharing a directory over a network from a Windows PC is easier than on a Chromebook. Windows PCs also support DLNA out of the box and File History does a good job of archiving user files, even over a network drive.

Security and privacy are an issue on Windows and that’s why there’s a virus-checker built into every PC. Secure boot helps and some of the new Windows 8.1 devices come with disk encryption enabled but the security model on a Chromebook is better. Everything that runs is sandboxed unless given permissions by the user. The secure boot process goes further than the Windows model where you can actually turn secure boot off while leaving all the personal files on the system. There’s a Power Wash feature on ChromeOS that will clean your system in 60 seconds. The same feature on Windows takes 10 minutes and that’s assuming you’ve been running an encrypted file system. If not, it can take hours. One could argue that you need to trust Google before you can rate privacy on a Chromebook but both netbook and Chromebook have guest modes. Windows supports local accounts too. Windows has some very advanced features in the Pro versions but that’s not relevant here. My Windows 8 tablet security assessment is here and it applies to many of these netbooks. I’m  still assessing ChromeOS security but from what i’ve seen so far, ChromeOS is better and certainly safer out of the box.

Video editing is an argument but the experience on a $200 Windows PC isn’t that thrilling. Yes, you can do some simple edits at 720p and there are some good apps that will help you do that but what do you do with the 1GB source file you had to load onto your Windows PC that had just 3GB free? The issue of file storage is a big one. Move to a large hard drive-based system and performance really drops as the hard drive is a huge bottleneck, power drain, noisy and less-than-rugged. The video editing argument isn’t one that will be significant to many people so let’s move on.

Upgrading a laptop might be easier on a Windows PC design than on a Chromebook and the reason is that many variants of a cheap Windows PC will be produced for different markets. Some will have 4GB RAM, some will have hard drives. It means that the mainboard is generally a little more flexible when it comes to upgrading. This won’t always be the case but  it’s currently easier to find a low-cost Windows laptop with a SATA interface than a Chromebook with a SATA interface.

Other things to consider:

The Chromebook retains unique features over Windows at any price and the proposition for education and SMB markets is clear but it’s in the very vocal consumer market where Chromebook may have a problem. “Minecraft” sums up that particular fight well and Microsoft literally own that. Ultimately though there are a lot of differences between Chromebooks and the new wave of Windows netbooks. In their current form they will survive in separate segments but there are two important points to consider. The first is consumer understanding. The second is OS evolution.