It was last September when my Ultrabook screen went blank and never came back. I was gutted; Not only because it was my favourite PC but because I was half-way through reporting on the IFA trade-show and I had a flight to the IDF conference 2 days later. Thanks to Intel Germany I flew out with a Surface Pro 3 and the more I use this incredibly well-designed tablet PC, the more I like it. It’s not my main PC though and I thought I would take the time to explain where the Surface Pro 3 fits into the life of someone who is literally surrounded by touch-screen tablets, laptops and mini PCs. The Surface Pro 3 has taken on the important role of being my hot-desking PC. 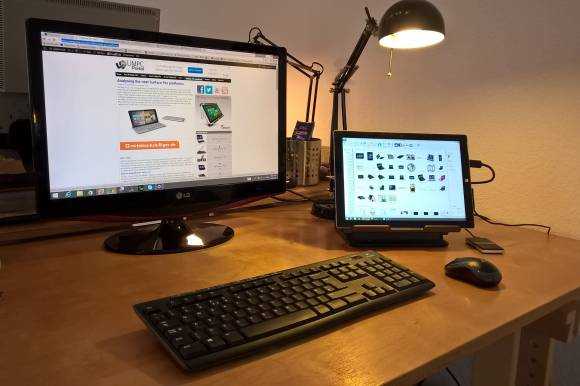 Hot-desk setup with the Surface Pro 3 and Belkin USB 3.0 dock

Let me start by reviewing the Type Cover keyboard. This bouncy slice of mechanics feels strange, unlike any keyboard I’ve ever used and yet it’s productive. It has a backlight too! It snaps willingly to the tablet and is the perfect demonstration of how a tablet can turn into a laptop. Almost. The biggest issue with this setup is the area required to hold it stable. A laptop requires the area under keyboard; The Surface Pro requires an extra 200 mm behind it for the stand. It’s this huge area that will cut your productivity over a standard laptop if you rely on ‘lap-toping.’ I tried it for a few keynotes and press events and wasn’t happy with stability. Despite that the stand is worth having and after 4 months using the stand I don’t have any sign that the mechanics are wearing out.

The Surface Pro 3 is an expensive hot-desker. $780 buys you a Core i3, 64GB, digitizer-capable tablet but if you don’t need the pen-layer you might not be getting best value for your money. Prices for Ultrabooks have come down recently and a when I look at devices like the Dell XPS 13 (2015 version with Broadwell) I see more battery life, a bigger screen, a better keyboard and more processing power for the same money and just 10% more weight. The Core-M mobile PCs are looking good too. The Lenovo Yoga 3 11 and ASUS Transformer Book T300 Chi are around the same weight and the Acer Aspire Switch 12 is entering the market at just $699. There’s no digitizer on the Acer Aspire Switch 12 and it’s not as powerful as the Surface Pro 3 but it’s much cheaper and arguably more suited to being docked as you can use the Bluetooth keyboard and pointer. Many of these Core M options are fanless too and that makes a difference in a quiet office. 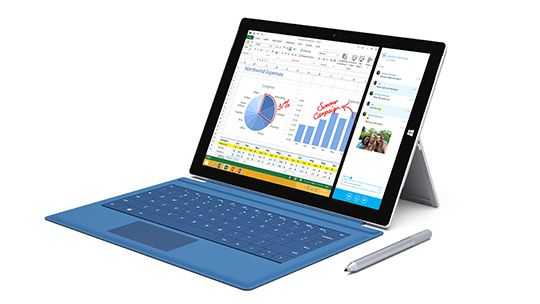 The Surface Pro 3 isn’t loud in normal use but I occasionally hear the sound of a working background process or a heavyweight web page. When I’m rendering my 1080p videos the fan gets almost embarrassingly loud in my co-working office but one can’t moan when it crunches through transcoding with such speed. Quick Sync has come a long way since I first tested it with a 1st-generation Ultrabook in 2011. Handbrake (with Quick Sync support) can now crunch a 1080p 50 FPS 30Mbps file down to 720p at over 200 frames per second!

At this point I should note that I don’t have a digitizer pen but as I have other devices with a digitizer I know that I rarely use such a feature. The only time I really wanted a pen was when I was using the Surface Pro 3 as a whiteboard over Miracast to an Actiontec receiver on a projector. It would have been nice to use One Note as a whiteboard but as it turned out, my finger wasn’t bad either.

While I’m normally mains-power connected I have had reason to worry about battery life. The Intel Developer Forum proved to me that you won’t get through a day without a charger and that, unfortunately, adds weight to the overall package. This is significant as the Ultrabook I was using previously could get through a day meaning that the 1.4KG was all I needed.  200 grams of power supply brings the total tablet/type-cover/power weight to 1.3KG. Looking at the ‘powercfg’ battery report I see that the battery hasn’t worn in the last 4 months at all which indicates that Microsoft have used a good quality battery.

The port choice on the Surface Pro 3 needs consideration. A Mini-DisplayPort is provided for video output and although DP is generally the most flexible it’s not that common to find it on mainstream monitors or projectors. I’m using a DisplayLink video connection (over USB 3.0 via the docking station) which solves that problem but it reduces the quality of graphics and video playback and requires some work from the CPU. That’s not an issue for office-usage but it needs to be mentioned. The docking station also solves the issue of available USB ports. One port isn’t enough for hot-desking if you don’t have a USB hub or USB docking station. Finally there’s the issue of using a MicroSD card slot if your camera uses SD cards. Again, a USB adaptor is required. 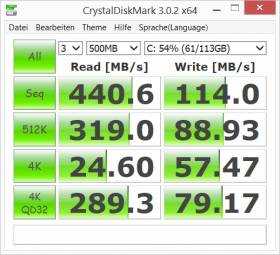 I could use the Surface Pro as my only PC and it makes a fantastic hot-desking solution if you’re prepared to set up a USB 3.0 dock or DisplayPort screen and USB hub but there are two major considerations. 1) The Surface Pro 3 isn’t the best hot-desking solution at the price. Many Ultrabooks would be better as they would offer a better keyboard experience, more ports and larger battery life for a similar weight. The new Dell XPS 13 2015 is the one to watch. 2) The surface Pro 3 isn’t the best casual tablet. It’s too heavy and large. 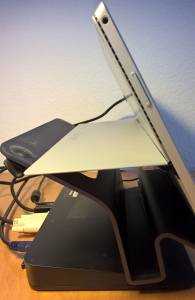 Alternatively, without the docking station and monitor I would use a mini USB 2.0 hub, USB Gigabit Ethernet adaptor and a cheap laptop stand.

I’ve written about future Surface Pro platforms before where I highlighted a number of routes to the next Surface Pro products. A smaller, lighter, fanless Surface Pro is possible with Intel Core M or there’s the possibility to improve the SP3 all-round by using a  fanless Skylake platform later in 2015. Having a fanless option with wireless charging and WiGi would showcase Skylake well and I think this is the most likely scenario for Surface Pro 4. The Skylake option is something that could be demonstrated in Q3 for Q4 availability. Here’s a rundown of the options.