You are probably familiar with Intel’s NUC range of Mini PCs. They’ve been popular and now that Braswell is shipping you’re probably going to see a new range of them. Intel are also introducing a Mini Lake reference design that will be over 30% smaller. Beyond Mini Lake though is a proposal for a completely wire-free Mini PC. Meet the ‘no wire’ Mini PC. 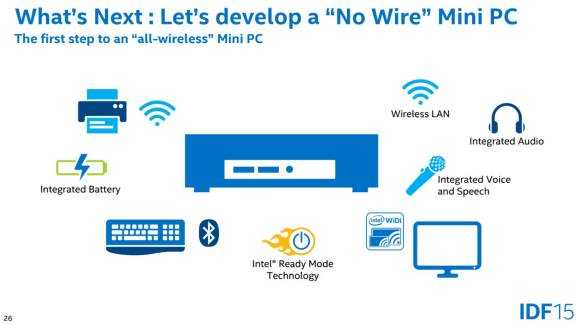 Before we look at that, take a look at what Intel have published about the Mini Lake mini PC reference design. 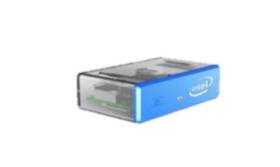 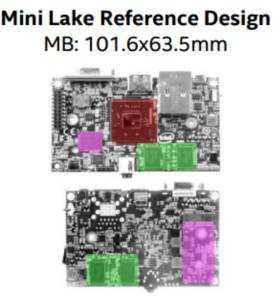 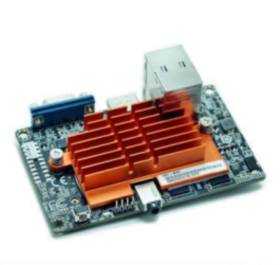 Mini Lake uses smaller memory, storage and CPU modules to enable a motherboard that is 38% smaller than the current NUC boards. The Mini Lake reference design is not just there to be smaller because Intel think it will bring the bill of materials down to $100 for a purchase price of about $130 which is the same price as the Compute Stick. They’re also more efficient and Intel say that they expect them to be powered by USB. Keep a look out for devices based on the Mini Lake reference design. (The ECS Liva is likely to be one that was seen at CES.) 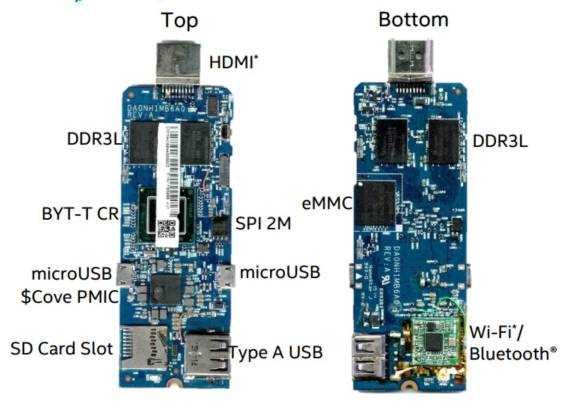 Inside the Intel Compute Stick 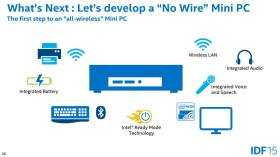 The paper proposal for the ‘no wire’ Mini PC was presented the same IDF15 technical session in Shenzen today and can be seen on the PDF of the presentation. (Source.) No more details are given in the PDF so let’s walk through what we see in the image on the right..

Firstly you’ll note that there’s an integrated battery. You’ll need that to support wireless charging which won’t work if you move the unit away from the charging location. Expect a relatively small battery for, say 1-2 hours of operation. Obviously you’ll have WiFi for connectivity but the solution is also going to use WiDi over WiFi for the screen. That’s a solution that won’t work well for desktop usage but would be fine for home theater / streaming solutions. Ready Mode technology is effectively a new always-on standby state. 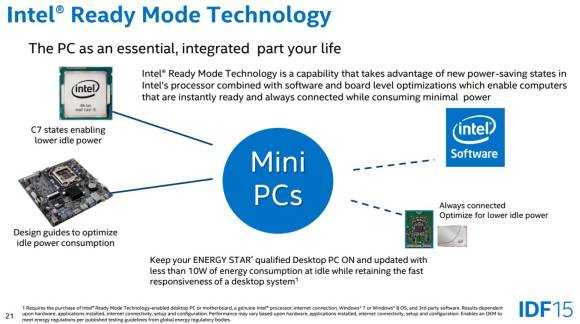 There’s a Client Computing Group keynote on day 2 of IDF15 so if we’re lucky we might get to see a prototype or reference design. Stay tuned!